Never too old for new ideas 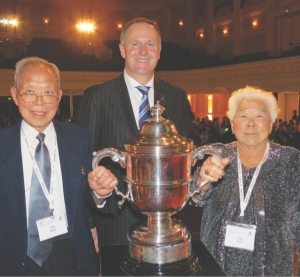 ADVERSITY MAKES you struggle, so think and look for answers, say horticulture industry pioneers and innovators Fay and Joe Gock.

The pair, both in their 80s, have for 60 years wheeled out good ideas: they were the first in the world to put stickers on fruit, they’ve grown seedless watermelon, and they pioneered using chilled polystyrene boxes to export broccoli.

Fay even now drives the tractor on their 60ha property where the Gocks still grow commercially. Both born in China, they came separately on refugee permits to New Zealand at the end of World War II. They married in 1956, when Joe was market gardening with his father in Mangere and Fay was the daughter of a Karangahape Road, Auckland, fruiterer. They started their own growing business and a partnership of innovation which has led the industry.

Fay, during her teens, erected the first signs in her father’s shop.

“Nobody cleaned vegetables then,” she told Rural News. “I was 15 or 16; everything looked dirty, nothing got sold.  I said to my dad ‘why don’t we go wash it and see how it performs?’ I suppose every shop down K’Rd was cursing me for making a start on washing carrots; then they all started washing them.

“When I married Joe we decided to do commercial washing – the first fruit and veg washing – carrots, parsnips…. now potatoes get washed. Everything comes in stages… one thing leads to another.”

Asked to explain their talent for new ideas, Fay says: “It’s through hard times you struggle, and then you have to think ‘what can I do to make things better’. Your brain starts working. If everything’s milk and honey you don’t worry about things like that.”

Joe: “I think that’s what we growers do: we are always trying to think of something new, something better. We started growing seedless watermelon; that was not even thought of then.”

The idea came through reading.

“There wasn’t anything available at that stage. We thought ‘oh yeah we can always be mad scientists’,” says Fay.

However, the deliverer got their seedless watermelons mixed up with ones with seeds. “So we decided to put stickers on,” explains Joe. “We were the first in the world to do that.  We looked all over New Zealand, all over Auckland and nobody could do it. We thought ‘how the heck are we going to put the name on it?’

“We managed to get hold of Allens who do calendars and a sticker developed from there.”

In the 1980s the Gocks grew large quantities of broccoli, a relatively new crop at the time. Joe developed and patented the Gock bushel-sized polystyrene box, which can be packed with ice and are still used in the industry today.

It was a matter of trial and error, he says. “Some exporters wanted to send the broccoli overseas. We thought ‘how the heck are we going to keep it for a longer period?’.

enough. So we thought, ok, we put some ice in and see what happens. So we put ice in it and it comes out perfect.”

Using a chilly bin was too dear so they looked around to find someone to make the boxes. The mould cost $8000, so it was patented and charged out to others at “a few pennies” each.

“So the exporters started buying it from us and sending it to Hong Kong, Hawaii, no problem. Meanwhile, we use the boxes to send broccoli to South Island and we get about $6 a kilo – $60 a crate, that was quite good. Everyone was using it and it paid for the mould in two years.”

The Gocks have grown kumara for nearly 60 years and were the largest growers in New Zealand in the 1950s. They were the first to raise kumara tubers by using under-earth heating in modern hotbeds.

They developed a disease-free kumara strain, which became known as O-wai-raka Red. In the late 1950s, theirs was the only disease-free stock in Auckland. When Ruawai and Dargaville stock was devastated by black rot they donated their stock, through the then Department of Science and Industry Research (DSIR), to help re-establish crops.

Joe says they had developed the disease-free stock through vigorous testing, keeping the best each year. They also pioneered, with DSIR, a prototype kumara curing shed, reducing crop loss from 50% to less than 1%, enabling kumara to be marketed all year round.

Although they believe hard times make you innovate, Fay says not everyone has that ability.  “It has got to come into you naturally. If you like what you are doing it’s not a chore, but if you have to be forced to do something it becomes hard work.”

Still many people don’t bother to experiment or persist with a problem, Joe adds. The answer is there if you want it: “Keep trying and keep thinking for yourself,” Fay says. The answer may not come immediately, but it will come.

The Gocks have been active members of the Chinese Commercial Growers Association since the 1950s, mentoring many young growers. But Fay says a lot of Chinese young people go into professions these days and are not attracted to growing.

“Market gardening, you don’t make a lot of money: manures, wages and other costs have gone up, but the prices haven’t gone up, some have come down.”

But just like farmers, many growers enjoy the lifestyle. And along with a love of growing, the Gocks share a deep belief in helping their fellow man. “What are we going to eat? Somebody has to do the growing. You must work for mankind, not yourself”.

Joe: “Remember why you are growing: you have it in your heart to do it for the people, not for your pocket.”