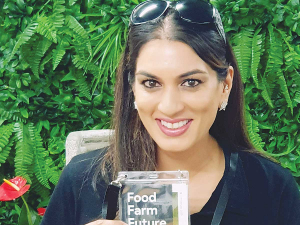 Among those was Priya Wallabh, strategic development manager for Ecolibrium Biologicals, who attending the event for a second year.

Ecolibrium Biologicals is a bio agritech company based in Pukekohe making sustainable pest control solutions. Wallabh says biological pesticides have been around for a while, but the aim of its products is to give growers the same experience as using a synthetic ag-chem.

“We know in order to compete with ag-chems and for growers to make that change they need to have the same experience in terms of efficacy, quick knock down, price points etc,” she told Rural News. “So, it gives them the same result, but in a more sustainable way.”

Ecolibrium has been in operation for about two years, but the founder Stephen Ford has been working on the technologies for many years.

Wallabh says she is lucky to have been able to go to evokeAG both years and found it valuable for the discussions, educational sessions and networking opportunities.

“A main reason I went was networking and integration into a larger ecosystem,” she says.

She came out with more leads than she expected.

“Networking with all the international delegates was great. But it was surprising the degree of networking we did with each other, with the almost 70 delegates from New Zealand.

“We are such a small country but most of us did not know each other’s companies or technologies even existed.

“Overseas people might know who we are, but within New Zealand we didn’t know each other so it was really important for us to connect.  For instance why go all the way overseas to source out things which are just in your backyard?  That was a valuable lesson for us.”

“It is good to have people who share your experiences.”

A trip to Mildura for about 20 Kiwis after the Melbourne conference helped cement this. They visited a smartfarm, nursery, fertiliser facility and one of Australia’s largest wineries and almond processing plant.

It was great to see the ‘fruit bowl’ of Melbourne where the city gets most of its grapes and citrus,” she says.

“All farmers have their own challenges – I come from a farming family myself in Bombay Hills so I understand this first-hand - but Mildura has its own unique set.

“They are constantly battling dust storms, fires and droughts.

Wallabh says one thing that carries across farmers in every single region is resilience.

“They just keep on carrying on. But because they are resilient they are more open-minded to adopting new technologies to help combat those problems.”

Previously it had been traditional, intergeneration farming.

“But now farmers are more open minded because Mother Nature is delivering more challenges than they have solutions for,” she adds.

“The weather seasons are changing so cropping patterns change, you plant varieties suited to summer but now summer is drawing out into winter…

“In Aotearoa we may not have the same problems as Australia, but we share the bond and empathy of being growers and we can count on that happening here to some degree.

“This is a positive thing as these challenges are driving innovation and innovation drives opportunity.”

❱❱ The Melbourne event evokeAG was a two-day international event all about innovation in agriculture. It drew delegates from the entire agriculture network from across the Asia Pacific region and internationally.