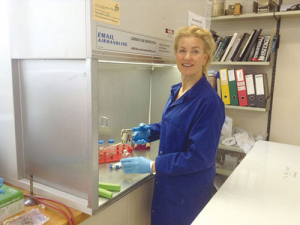 Rebecca Phillips uses sterile techniques in the laboratory to quantify chemical and biological production of N2O and N2.

New Zealand and American scientists have discovered a previously unknown way of chemically converting reactive nitrogen, common in soil and water, into a safe form rather than a harmful greenhouse gas.

The discovery, published by the science journal Nature Scientific Reports online in December 2016, could ultimately help reduce emissions by the NZ agricultural sector.

The heart of the problem is that while some natural soil organisms convert reactive nitrogen in the soil to non-reactive di-nitrogen, N2, – the common nitrogen gas which makes up 78% of the atmosphere – they also produce nitrous oxide, N2O. Nitrous oxide is both a major player in ozone depletion and a potent greenhouse gas – 300 times more effective than carbon dioxide and 10 times more than methane at trapping atmospheric heat.

Agriculture worldwide is a major source of N2O, mainly because of nitrogen fertilisation. Ultimately it will break down, but not before damaging the environment. Nitrous oxide survives for up to 120 years in the atmosphere.

However, the scientists have found a chemical process by which organic nitrogen, which mainly comes from plants and fungi, combines with inorganic nitrogen, mainly from fertiliser and urine, to produce unreactive N2 without either biological processes or the kinds of conditions possible only in a laboratory.

“The idea that you can form inert di-nitrogen without any enzymes, without any biology, is pretty new,” Dr Rebecca Phillips, of Landcare Research told Rural News.

The Landcare Research team of Phillips, Andrew McMillan, Gwen Grelet, Bevan Weir and Thilak Palmada utilised the only analytical instrument in NZ capable of measuring atmospheric concentrations of both N2 and N2O, situated at Landcare Research in Palmerston North.

They had help from soil microbiology expert Professor Bongkeun Song at the Virginia Institute of Marine Sciences, and Professor Craig Tobias of the University of Connecticut. Tobias is an expert in isotopic measurement, essentially a means of identifying and tracking the nitrogen by its atomic characteristics.

Phillips believes the finding could lead to practical applications, reducing farmers’ environmental footprint by converting excess inorganic nitrogen that would otherwise be leached into water or emitted as nitrous oxide.

“But it still takes us a little more work to figure out exactly the best way to get the most N2 and the least nitrous oxide.”

Phillips says Song has continued investigating the process over the past month and it appears that more organic matter in the soil is beneficial.

“The discovery is promising enough, we think, that all it takes is the work to figure out the right combinations and conditions to bypass nitrous oxide in the process of removing excess N in soils and water.”

The scientist recently made a case for funding further research into using this new bypass pathway to mitigate N20, to the NZ Agricultural Greenhouse Gas Research Centre and MPI in Wellington.

The proposal is in response to a call for research proposals from the Global Research Alliance, a group of 16 countries aiming to address global scientific problems collaboratively (http://globalresearchalliance.org/updates).

Meanwhile, Phillips thanks Song and Tobias for their help.

“They were willing to work on it, even though we didn’t have funding for them, because they thought it was so interesting and so important towards closing the gap in our knowledge of the nitrogen cycle.

“I’d like to mention that – just from a human relations standpoint – about scientists. It’s important for the public to know that a lot of time we don’t get paid for the extra work we do. We do a lot of things just because we want to advance the science.”