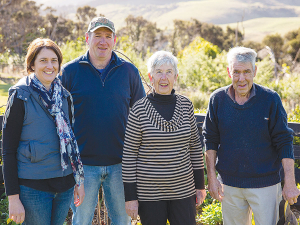 Sandra (middle) and David (right) Innes who have made a flying start to their farm succession plan are pictured with daughter Rachael (left) and husband Glen.

At least 50% of New Zealand farmers identify succession planning as an issue for them, their family and their farm business.

“I think a lot of farmers have thoughts about succession planning in their heads,” said Sandra Innes. “But they don’t know how to begin or how to start that communication.”

But Sandra and David Innes have made a ‘flying start’ after taking part in the Red Meat Profit Partnership’s (RMPP) series of Farm Business Transition and Succession Workshops.

RMPP developed the workshops to take farm businesses through the transition and succession process. Participants attend a series of half-day facilitator-led workshops over three to four months, then a one-on-one clinic.

The first workshop covers the importance of understanding what all family members want and need from the transition and succession process as an essential first step in developing a plan.

The Innes have recently moved to a lifestyle block bounding the hill country sheep and beef farm on Banks Peninsula which they have farmed together for 45 years. David is the third generation of his family to farm the land, which is now leased to their youngest daughter Rachael and her husband Glen.

“The reason we wanted to take part was that, like many New Zealand farmers, we are facing the succession of the farm business,” said Sandra. “But like many people we weren’t sure how we wanted to do it.”

She says the first workshop was a great starting point for that process.

“We could have just gone straight to our accountant or solicitor, but we felt the more options we knew about the better. The expert speakers at that first event were really helpful. They outlined the options for governance and structures and answered any questions we had,” she explained.

“But the really huge advantage was being in a small group of farmers who were at various stages of farming, and the willingness of everyone to open up and share their experiences and concerns.”

Sarah Barr has extensive experience with farmers on succession planning, leadership skills and team culture through her role with Coach Approach Rural, based in South Canterbury. She facilitated the RMPP workshops in Darfield and Geraldine.

“What I like about the RMPP workshop model is its focus on beginning with people, relationships and communication,” she said.  “That is my approach too, but often there is a tendency to go straight into the structure. Unless you are very clear and understand what you want to achieve, the structure may go wrong.”

Barr says the awesome thing about these workshops is the insights and learnings the group members get from one another.

“Rachael and Glen went to that one and they found it really interesting -- particularly the legal and accounting interpretations,” said Sandra.

“We all felt the speakers at the workshops we attended were very good, and the facilitation. We have good open communication as a family, so from that point of view we had a head start.”

Barr says in developing your succession plan you first need to understand the needs and wants of all the family, so getting all those views and perspectives shared in one room is very valuable.

“Moving off farm for the next generation is a big job. The RMPP funding for these workshops has given us an opportunity to do that job well. I hope a lot more farming families make use of this,” Sandra Innes says.