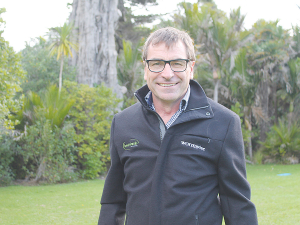 The PGG Wrightson animal health technical expert told a recent Beef + Lamb NZ Wormwise workshop at Wenderholm Park, north of Auckland, that this requires background knowledge of the worms, their life cycles, and strategies for pasture, drench and breeding.

His presentation ranged across different management techniques and tips to keep worms under control and slow the development of resistance.

“The adult worm has to live in the sheep or other ruminant and for some people that is a revelation. Some think they are out in the paddock,” Dowling said.

At any one time, only about 5% of the worm population is inside the animal and 95% - in the form of eggs and larvae - are outside.

In the animal gut are sexually mature female worms and male worms. They mate and the female lays eggs which are passed out in the faeces.

The eggs hatch in the faeces where conditions are warm and moist. “If you have grass growing you have got parasites developing,” Dowling said.

L1 and L2 are in the faecal pat. The L3 move away, wriggling or carried by earthworms. They can sit in a dew drop, get eaten by the animal, develop to fourth stage larvae and adults and so the cycle begins again.

L3 has a limited lifespan, but these don’t mind the cold because it slows their metabolism. In summer, when it is warmer and their metabolism is faster, they will burn up their fat reserves and starve more quickly, Dowling explains.

Hot conditions in summer can halve the number of barber’s pole worms in about two months.  In winter it can take four months or more. Good grass growth also favours worm development.

“We want to reduce the L3 stage because they are the ones going into your animal,” Dowling said.

“Worms are not directly competing with your animals for nutrients in the gut. But they excrete things which cause a lot of irritation. These interfere with the digestive process and in more severe cases result in a protein-losing gastroenteropathy.

“But the biggest impact they have is that it makes the animal feel sick. When you feel sick you don’t eat. That is by far the greatest impact parasites have.”

Dowling says although drench kills susceptible larvae and adult worms it doesn’t touch the eggs.  It takes 21 days for an ingested L3 to become a sexually mature adult.

A faecal egg count only tells you the adult female worm population, it does not diagnose the larval population which can be high and cause a lot of damage.

Dowling advises that when a sample is collected it needs to be as fresh as possible then stored in the fridge so the eggs don’t hatch.

“If you want to do larvae identification you’ll need a second sample. However, don’t put this sample in the fridge as the barber’s pole eggs will not hatch.

“If I want to know what is happening in a mob I want to sample as many animals as possible at random in that mob,” Dowling said. “This gives a more accurate indication of the average faecal egg count and worm burden.”

He pointed out that an egg count will only tell the adult worm population.

“In calves drenched four weeks ago the faecal egg count only tells you the larvae they ate in the first week after drenching.

“If you are drenching to faecal egg count and you think it is not very high so you stretch the time out between drenchings, then you could end up with paddocks with massive numbers of parasites,” Dowling explained.

Genetics count for much

For genetics in sheep, Dowling says you should buy rams from someone who doesn’t drench their sheep because then you will get worm resistant genetics.

He says farmers must carefully select heifer calves or ewe lambs as these will have an impact on genetics. A ewe or heifer might influence the genetics of, say, five or six offspring. A ram across 100 ewes has far more influence and similarly with a bull.

“Your breeder has far more influence on the genetics of the flock than you do,” Dowling said.

“We look at them in the yard - like him, don’t like him, keep them.... For structure traits it is important. However, for breeding for resistance to disease you want to be talking to a breeder who is going the way you want to go.”

A farmer collective breeding for parasite resistant genetics claim they are leading the pack as drench resistance becomes more prevalent and drench failure is reported NZ-wide.