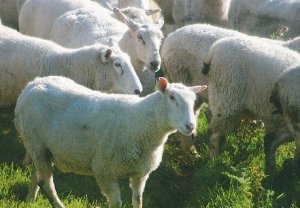 “Some farmers could tend to be complacent when it comes to making decisions for winter feeding because they have a surplus to work with,” says Farmax general manager Gavin McEwen.

“Based on the historical pasture cover information we have in Farmax, we want to caution farmers against this tendency as there are plenty of decisions to be made heading into winter even if covers are higher than normal.”

As of end of March this year, average pasture cover on North Island sheep and beef farms was 2,300 – 2,700kgDM/ha.

“We’ve continued to have a very good growing season through the autumn in most regions.”

“What’s important to remember... is that not all pasture covers are the same. For example, take a Northern Waikato farm that had a well controlled pasture cover, say less than 1900 kgDM/ha at Christmas time, and has since accumulated cover to the 2,300-2,700 levels. This farm’s pasture will be a relatively fresh sward with moderate metabolisable energy levels and low levels of dead matter.

“Alternatively, a farm in Hawkes Bay will be in a completely different scenario with pastures that were high at Christmas and have continued to stay at high levels until now. These pastures will have a high level of dead/stem material and lower metabolisable energy levels.”

The difference in quality can make a marked difference in an animal’s ability to convert dry matter to protein, even though quantity of feed offered may be similar.

Brier says the challenge in both situations is managing covers appropriately to convert the extra feed effectively and efficiently into increased profit.

“The simplest option would be to do nothing and accept reasonable results given the impact of heavier ewes at mating. But if you have accurate knowledge of your current pasture cover and can model scenarios for winter, there is opportunity to push the envelope and create higher profits.”

“For instance, in the example above, Farmax estimates that the energy content is 8.5 MJME/kgDM on the Hawkes Bay farm compared to 9.1 MJME/kgDM on the Waikato farm.  That’s a 7% difference.”

Also, the better quality pasture in the Waikato situation means net autumn growth will be higher.

Getting timing right when weaning cows;

Timing of nitrogen fertiliser use;

Use of winter supplements;

Lifting spring stocking rates to prevent a repeat of this season.

McEwan says to maximise profit from pasture, “you need to analyse each of these six factors to decide what needs to be done to positively affect your bottom line.”

Going into autumn, Beef + Lamb New Zealand is encouraging farmers to think about how they will manage their winter fodder crops – particularly in a year when feed resources are likely to be tight.

Andrew MacPherson has been appointed as the new chairman of Farmax.