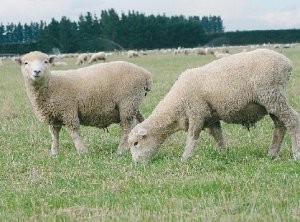 SHOULD WE forget faecal egg counting and target worm treatment by animal performance instead?

Their paper, published in the society’s latest proceedings, suggests the advent of EID weighing systems capable of rapidly recording individual animal performance means there’s a case for abandoning FEC and its often-overlooked limitations.

“From time to time technological advances provide an opportunity to rejuvenate our approach to what is considered ‘normal’ farming practice.... Such an opportunity has arisen in recent years with the widespread availability of electronic recording of livestock and automated weighing and drafting systems.”

FEC has “known but often-overlooked complexities and technical limitations that can severely impact the interpretation of a result,” they warn. For example, feed intake and density of faeces is generally not taken into account as results are expressed in eggs per gram. Consequently lambs with apparently identical FEC results may be pumping out four times more eggs than others. Similarly, the FEC of lambs all shedding a million eggs/day can vary fourfold (see table).

Greer and Sykes cite previous work where different feeds, such as sainfoin hay or grazed lotus, reduced FEC compared to results off grass, but note the difference is largely explained by changes in drymatter intake.

“In both these examples, reliance on FEC alone may provide a false indication of any anti-parasitic properties of the plant,” they warn.

In addition, what they call “the ubiquitous reduction in voluntary feed intake” caused by worms can vary from 10% to 90%, even in subclinical infections. Greater reductions in feed intake for a given worm burden will result in higher FEC counts owing to greater concentration of eggs per gram of faeces.

Then there’s the fact different worm species produce eggs at different rates, and even within species eggs shed per female worm may vary substantially.

“These differences in [worm] fecundity mean that interpretation of nematode egg counts is heavily reliant on knowledge of species... Given the cost and specialist skills required for species differentiation, this is rarely attempted.”

Immune development of the host animal also influences eggs shed. “As such, FEC is unlikely to provide a reliable indicator of the actual worm burden in animals older than four months.”

“Unfortunately, there are relatively few alternatives to FECRT for the determination of anthelmintic resistance status.”

It’s that lack of alternatives – to reduction tests or simply the practice of faecal egg counting itself – that make Greg Mirams, of Dunedin-based Techion, argue FEC is still a valuable tool.

“This debate is not new and the reality is we don’t have a perfect tool... but there are not a lot of alternatives,” he told Rural News. “We know the faecal egg reduction test has holes in it but we are leading the world in this. Our Drench Smart programme is seen as the benchmark in Europe.”

The key point with FECRT results is not to get too hung up on precise numbers, but rather to band results into three categories, a bit like traffic lights: a green result is the drench works; the amber warning signal is the middle ground where there’s some control, but it’s incomplete; and the red is complete failure.

“We know the test isn’t sensitive enough to work to individual percentage points but we are extremely confident in its level of repeatability.”

With straight FEC results, they shouldn’t be used as a standalone measure of whether to drench or not, but as part of the decision process taking into account other factors such as stock class, feed supply, even labour. They also need to be done regularly and well to build a reliable picture of what’s happening.

Mirams says individual animal performance measurement, as Greer and Sykes propose, has a place in parasite management, but like FEC it should be part of a suite of information for decision making, rather than a standalone determinant. In practice, few farms are able to record such details yet, he adds.

Greer acknowledged to Rural News the tone of the NZSAP paper is “deliberately provocative” but doesn’t believe the “abandonment of FEC” is a dangerous message to have promulgated.

“The main reason for it was to highlight some of those limitations [with FEC] but we can’t do that without offering a ‘where to from here’.... Our objective was to get people thinking about this and discussing it.

“You’ve got to think about what FEC can actually tell you.”