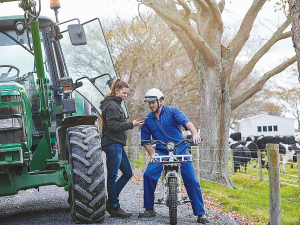 Faafoi said class exceptions had been established for border entry for a limited number of veterinarians, deep sea fishing crew, as well as agricultural and horticultural machinery operators.

He said the latest exceptions are for up to 30 veterinarians, 570 deep sea fishing crew, and 210 agricultural and horticultural mobile plant operators, but these exceptions will be time-limited.

Faafoi’s announcement appears to signal a change of tune from the Government, which had previously claimed unemployed New Zealanders should be used to fill any labour gaps.

“There are not enough New Zealanders to fill current needs for livestock veterinarians, especially in isolated areas. Training to be a vet takes years so these vacancies cannot be filled quickly. Vets provide significant benefits to our economy and communities, by ensuring biosecurity and food safety requirements and supporting animal welfare,” Faafoi said.

“Agricultural and horticultural mobile plant operators are employed across regional New Zealand to operate highly-specialised machinery. Their skills are required urgently to avoid the loss of crop and animal feed that will soon be ready for harvest.”

“The decision to allow up to 210 skilled foreign machinery operators to come into New Zealand for the spring/summer season will show its benefits across the entire rural sector,” he added. “It does come at the 11th hour but we appreciate Covid-19 does need to be strictly managed for all New Zealanders and we will make it work from here.”

Federated Farmers has also welcomed the decision to “slightly loosen” border entry restrictions to allow in certain specialised staff crucial to the agriculture sector. Immigration and employment spokesman, Chris Lewis, said although farmers and contractors had hoped a higher number of exceptions would be granted, the announcement was a step in the right direction.

“We would have liked to see more, but it will take the pressure off contractors and, indirectly, farmers.”

However, Lewis said farmers were still concerned that the border controls meant New Zealand had a shortfall of up to 150 experienced shearers.

“If that doesn’t change we are heading for some pretty serious animal welfare issues as hotter temperatures arrive.”

Meanwhile, Horticulture NZ has welcomed the easing of immigration rules around seasonal workers, which was also announced by Faafoi.

Horticulture New Zealand has welcomed the Government’s latest immigration changes, saying they offer support to stranded backpackers and RSE workers as well as the New Zealand horticulture industry at a critical time.

“The changes provide stranded backpackers and RSE workers with certainty and options, while acknowledging the importance of the RSE scheme to horticulture and the Pacific,” HortNZ chief executive Mike Chapman says.

“At the same time, we welcome the expansion of the Supplementary Seasonal Employment visa, which will allow people on expiring working holiday visas to work in the horticulture and wine industry, where there are not enough New Zealanders available.”

Nats will let more workers in

He says the party’s border policy will safely allow more skilled and essential workers in.

“National realises that New Zealand needs to grow its way out of this economic crisis,” Bennett adds. “This means we need a plan to get essential workers back into the country. National will support the primary sector and provide the long-term workforce security it needs.”