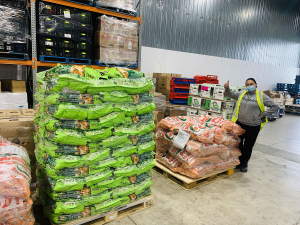 FairFoodNZ receiving a FIS delivery during the 2021 lockdown.

As New Zealand prepared for the first ever national lockdown in March 2020, a small team of five United Fresh staff were realising the impact that a nationwide shutdown would have on the country’s horticulture industry.

Immediately, they started redirecting hundreds of tonnes of fresh fruit and vegetables to food banks and community organisations, ensuring the country’s most vulnerable had access to nutritious food.

It’s a move that has seen the team nominated for a Primary Industries New Zealand Award.

United Fresh general manager Paula Dudley says the Fruit and Vegetable Box Project was the culmination of years of work for the team.

“We’ve been supporting and promoting the fresh produce industry, working with the entire value chain, from seed producer and grower to consumer for 30 years. The relationships and networks established in that time gave us a platform to move with speed in an unprecedented situation,” she says.

The Fruit and Vegetable Box Project offered a solution to two distinct problems resulting from the lockdown.

Dudley says that with hospitality outlets and independent retailers forced to close, thousands of tonnes of fresh fruit and vegetables could go to waste.

At the same time, with schools closed, 120,000 pieces of fruit and vegetable couldn’t be delivered to schools for the Ministry of Health-funded initiative, Fruit & Vegetables in Schools (FIS).

Within days, the team sought Ministry of Health approval to divert FIS funding, presenting a funding proposal to the Ministry for Primary Industries for further assistance, and liaised with Foodstuffs to secure a donation of 700 boxes of fruit and vegetables.

“We contacted foodbanks and City Missions to gauge demand for fresh produce amongst their communities. As word spread, a number of smaller organisations asked to be included in the project. The most efficient way to move produce out to communities was to work with large foodbank organisations that in turn distributed the produce to smaller groups,” says Dudley.

The United Fresh team mobilised their members to get the project up and running on 6 April 2020 – less than two weeks after that first lockdown was announced.

Dudley says that getting the project going was just the start.

“We knew that we had to establish a system of protocols to monitor the deliveries. We created databases, developed quality control systems, put in place controls to enable suppliers to adjust deliveries in line with demand, liaised with our FIS school staff, set up financial and reporting systems,” she says.

“Carrying out a project of this size would be quite an undertaking in normal circumstances. To manage it all under lockdown with our team split into two bubbles taking turns in the office was certainly a challenge.

“While the United Fresh team set up and managed this project, its success was due to the cooperation of United Fresh members and professionalism of the food distribution centres. We were proud to work alongside our members and take care of our community at such a difficult time.”

It is predicted that the monthly Food Price Index due to be released next week will show an easing in vegetable prices, with industry insiders saying the trend is set to continue as we head into winter.

The world's population seems to have lost some of the value in consuming fresh fruit and vegetables, according tor the President of United Fresh, Jerry Prendergast.

COVID-19: Wash fruit and vege in water only

Misinformation is circulating in some media and on social media regarding the role of food in the potential transmission of the COVID-19 virus, says United Fresh president Jerry Prendergast.

The average Kiwi pantry and dinner table will evolve in the new decade with a focus on fresh, fast, fit and fair, says United Fresh.