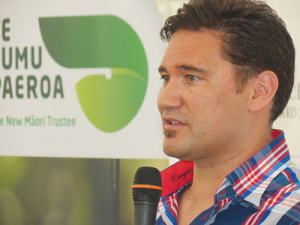 $30 MILLION will be invested in building 10 kiwifruit orchards on Maori land in the Bay of Plenty and Gisborne over the next 18 months, says entrepreneur Te Tumu Pairoa, in partnership with Quayside Holdings.

In the single-largest kiwifruit investment ever made on Maori land, at least 90ha of semi- and unproductive land will be converted into grower businesses.

Te Tumu Paeroa has developed a unique model for the enterprises, to allow full ownership of the orchards to transfer to landowners in an estimated 12-17 years after achieving a targeted rate of return on capital invested.

In the interim the land will be leased and Te Tumu Paeroa will build and run the high-performing businesses, carrying the financial risk.

“Our programme allows landowners to participate in developing a successful kiwifruit orchard on their land and see the ownership of the business transfer to them by 2030, creating a legacy for generations to come,” says Jamie Tuuta, Maori trustee and Te Tumu Paeroa chief executive officer.

“A core part of our programme is building the capability of landowners to successfully govern the business when it comes time to transfer ownership to them,” he says.

“We want to see Maori landowners involved in the whole process — developing skills and hands-on experience in running kiwifruit orchards on the ground and in the boardroom.”

By 2030, based on today’s return, the orchards are expected to generate at least $80,000/ha/year, or $7.1m, by growing a mixture of premium Gold kiwifruit and traditional Green kiwifruit. In the 2015-16 season the average return for Green kiwifruit was a record $56,673/ha.

“It’s difficult for Māori landowners to develop businesses on their land unless they have access to capital from other sources, because many don’t want to use the land as security on a loan,” he says.

“As a result, owners usually contract out the land to businesses that do have access to capital and can reap the financial rewards for taking the entrepreneurial risk. Maori landowners are missing out. Our programme addresses that, putting businesses in the hands of landowners.”

Te Tumu Paeroa has successfully piloted the approach, building two new orchards in the Bay of Plenty over the last three years. At least 9ha of kiwifruit vines were planted in 2016 and the first fruit will be harvested next year. The properties are managed by professional kiwifruit management companies Southern Cross Horticulture and OPAC.

It manages 100,000ha of Māori land, 2000 trusts and $100m in client funds on behalf of 85,000 owners. Its vision is to support owners to use their land to its full potential, creating a legacy for this generation and those following.

Quayside is the investment arm of the Bay of Plenty Regional Council set up in 1991. Its investments include property, shares and kiwifruit orchards; it is the majority shareholder of Port of Tauranga Ltd.

Iwi to take over monitoring role

A special ceremony was held in Taupo recently for the official signing of an agreement to transfer specific water quality monitoring functions to the Tūwharetoa Māori Trust Board.

About 150 people turned out last week to attend a field day at Ngai Tukairangi Trust’s kiwifruit orchard at Matapihi.