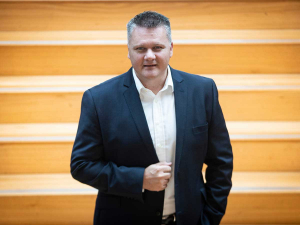 Westpac senior agri economist Nathan Penny believes there is “a chance” of an $8 milk price.

Penny says Fonterra farmers who follow the GDT auctions closely will be expecting a lift in the co-operative’s forecast milk price.

Waikato farmer Andrew McGiven says the 21% lift in WMP prices in the latest GDT auction will give Fonterra’s board confidence to lift the milk price range.

He says the GDT result was a huge surprise and “must certainly be due to demand outstripping supply for our products”.

“I guess this result will give the Fonterra board some confidence if they do look at milk price upsides for this season, and may even allow them to extend the range higher into the sevens.  Your guess is as good as mine on this one.”

BNZ senior economist Doug Steel agrees that there is “significant upward pressure” on Fonterra’s forecast range mid-point of $7.20/kgMS and the bank’s forecast of $7.40/kgMS.

However, it’s hard to predict an $8-plus milk price.

The effect of foreign exchange on the second half of the season and the amount of product forward sold by Fonterra need to be taken into account.

“Now, that will be our forecast payout if we sell all our milk at today’s price…how much milk from this season have we sold and how much is left to sell, we don’t know.”

Steel says clearly a 21% jump in WMP prices would mean a lift in the price.

All eyes would now be on Fonterra as it announces the co-op’s half-year results next week.

Fonterra chief executive Miles Hurrell says the co-op is assessing the situation, running the numbers on its forecast farmgate milk price and talking to sales teams on the ground to gauge future demand.

“While GDT results are one key input to the farmgate milk price, there are many other factors we need to consider – including, how far we are through the season, our sales book, foreign exchange and any ongoing impacts from Covid-19.”

Fonterra attributed last week’s extraordinary GDT results to continuing strong demand from China and South East Asia, and a reliable supply chain that had earned the trust of buyers around the globe.

Editor's note: Since this story went to print Fonterra has lifted its forecast milk price range to $7.30 to $7..90/kgMS.

OPINION: The non-performing China Farms have always been a source of headaches for Fonterra.

After years of losses, Fonterra's two wholly owned China farming hubs in Ying and Yutian have been sold.

Fonterra collected more milk in February thanks to better pasture growth in most parts of the country.

A familiar sight on our roads, Fonterra's milk tankers provide the vital link in getting the "white gold" off dairy farms and into the nation's milk factories.

Fonterra's Pahiatua and Longburn based tanker operators have proven the benefits of pulling together - quite literally - by hauling their trucks by hand for charity.