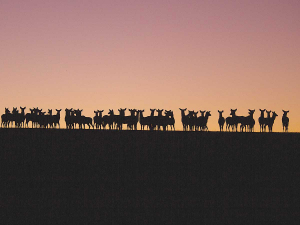 There may be light at the end of the tunnel for the country’s venison producers.

“In the next few weeks, some venison companies will be offering minimum price supply contracts for the game season, for shipment of chilled venison during September and October,” says DINZ chair Ian Walker.

“This year, we are seeing restaurants starting to reopen in North America. Also, prices for all meat in major world markets have begun what economists expect will be a steady, long-run climb,” Walker says.

It states that venison prices have remained weak in 2021 so far.

According to the report, prices have so far slid 2.9%.

“However, we see light at the end of the tunnel for venison producers,” it reads.

The report predicts that in the German market, vaccine rollout will boost demand and prices over the course of 2021.

It also notes that pickup will be gradual and price pickup won’t happen until midway through the year.

Meanwhile, Walker says there are two markets where growth is occurring: China and the United States.

“Prospects in North America and demand from China – a developing market for venison – keeps growing.”

He says that DINZ will be working with five major venison marketing companies to build year-round demand for venison, particularly at retail and online for home delivery.

“We fully recognise that deer farmers need a schedule premium over lamb to make venison production a competitive land use. The industry was achieving that until the impact of Covid,” Walker adds.

“Venison prices will improve. And hopefully none of us will have to deal with another pandemic in our lifetimes.”

He says that because deer farmers can bank on getting better prices during the chilled season, they should target getting venison animals away before the end of October, if that fits with their farm system.

Excuses fail to 'cheque' out with rural users

As banks start phasing out cheques for customers across New Zealand, Rural Women New Zealand (RWNZ) says its members are unhappy with the decision.