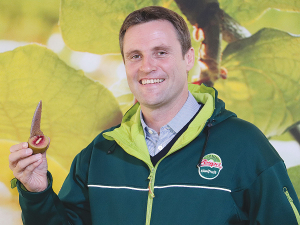 Zespri chief executive Dan Mathieson says it was pleasing result given how significant the challenges in the 2021/22 season were.

The NZ kiwifruit export and marketing company Mathieson heads has announced that it had exceeded NZ$4 billion in global revenue for the first time - despite all the challenges of the past year.

Zespri's net profit after tax for the 2021/22 year hit $361.5 million - a record result and up from the profit of $277.1 million of the previous year. The company says this was led by an overall strong performance and by the continued demand for Zespri SunGold licence.

These results saw direct returns to the New Zealand industry increase to a record $2.47 billion, including loyalty payments. Zespri says all this all came about despite considerable uncertainty generated by the Covid-19 pandemic and cost increases across the supply chain.

It says its earnings were spread through regional communities, including the Bay of Plenty, Northland, Nelson, Gisborne and the Waikato. It adds that grower returns remained strong, with per hectare returns representing the second best on record across all varieties.

The company also reported that its non-New Zealand supply sales increased to $536.9 million.

"This was an extraordinary season where the industry faced some considerable headwinds in market, throughout the supply chain and on orchard, yet collectively we found a way to tackle the challenge and to continue to succeed."

Cameron says not only has Zespri delivered strong returns for growers, including the second-highest per hectare returns, but it has also strengthened its partnerships across the global supply chain.

Mathieson says the results reflect the ongoing focus on investment in the Zespri brand, an ability to build demand ahead of supply to create value and the long-term relationships which have helped the industry overcome challenges and continue to move forward.

"This is a really pleasing result given how significant the challenges we faced in the 2021/22 season were," he added.

“The growth of our offshore production remains critically important, boosting our efforts to serve our consumers year round, helping to hold our shelf space, make our marketing investment more efficient and to maintain commercial partnerships to allow us to launch our New Zealand sales season.”

Meanwhile, Mathieson says Zespri is continuing to work hard to ensure it can deliver the remainder of the 2022/23 season’s crop, which has lower volumes than initially forecast.

OPINION: The Hound's reckons something has seriously gone wrong with the 'luck of the Irish' with news that Trevor Mallard is retiring from Parliament and will become New Zealand's Ambassador in Ireland.

New Zealand may be on the brink of scoring an historic and crucial free trade agreement (FTA) with the European Union (EU).