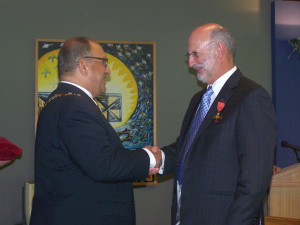 Colin Harvey receiving his Officer of the New Zealand Order of Merit insignia from then Governor General Sir Anand Satyanand in April 2008.

Colin Harvey (ONZM), one of the NZ agri-sector’s foremost innovators and contributors, died in a drowning accident in late January.

Harvey will be remembered for making major contributions to the New Zealand agricultural industry in a number of areas.

He is probably best known for starting animal health company Ancare in 1985. The company grew to be a leader in the animal health industry, supplying animal healthcare products to the New Zealand market and internationally – gaining significant market share across several animal health categories in the face of strong competition.

In 2007, the trading assets of Ancare were sold to multi-national animal health company Merial and in 2014 it also acquired the remaining R&D assets of Ancare, which had been operated by Harvey as a separate development company

Hailing from a family of dairy farmers in Taranaki, Harvey graduated with a Bachelor of Agricultural Science from Massey University and a Bachelor of Commerce from the University of Auckland. After leaving university, he

worked in a range of roles and companies in the animal health sector –including marketing and general management with Coopers Wellcome in New Zealand and Australia.

In an interview with the NZ Herald in 2002, Harvey described his first day on the job as ‘like being in a cage’.

"I arrived that morning through a mass of Auckland traffic to meet my boss, John Wright, and the rest of the Pfizer company – about six dark-suited people involved in pharmaceutical marketing. I was part of a new veterinary division," he explained.

Harvey admitted that he had no idea of the world of commerce or business.

"I was raised on a Taranaki dairy farm, I had led a boozy, rough and tumble life through university doing various farming-type jobs including as an artificial breeding technician. This, with an agricultural science degree, was supposed to qualify me to put these trials together.”

Harvey told the Herald that most of his peers at Massey were horrified that he had 'sold my soul' to take this job. He said that at the time, the common start for agricultural science graduates was to join the Ministry of Agriculture and Fisheries as an adviser or in field research.

However, Harvey’s commercial-nous was evident even then – stating:

After working for a number of animal health companies, Harvey set up Ancare in 1985 – with a mortgage on his house and $15,000 in holiday pay.

His contributions to the agriculture and animal welfare sectors were recognised in 2008, when he was made an Officer of NZ Order of Merit and in 2009 inducted into the North Shore Enterprise Hall of Fame.

In his speech, when inducted in the North Shore Enterprise Hall of Fame Harvey said the most rewarding aspect of his career was that: "mates from veterinary school at Massey University became my customers.”

In 1988, Harvey founded the Animal Remedy and Plant Protectant Association and – through chairing this – contributed to the formation of the new Hazardous Substances Act and the Agricultural Compounds and Veterinary Medicines Act.

After selling Ancare, Harvey kept close links to the agri-sector buying and farming Lake McKay Station in Wanaka (11,000 su), funding and chairing Country TV, as well as being a council member of Massey University.

He also remained an active investor in a number of technology investments and the chair of the Hobbiton theme set.

Ag innovator and contributor leaves his mark on sector

Colin Harvey, one of the NZ agri-sector’s foremost innovators and contributors, died in a drowning accident in late January.

An amazing life as a vet

Graham Wallace, one of the country's oldest veterinary surgeons, passed away on October 29 in Auckland after a very long, active life of 96 years and short battle with cancer.