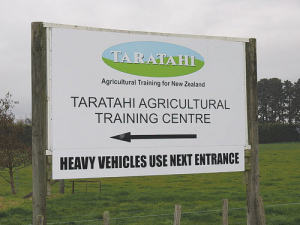 David Ruscoe, of the liquidator Grant Thornton International, told Rural News that they are still working through the issues facing the institute, which has residential campuses in Wairarapa, Reporoa and Telford.

Taratahi employs up to 250 people, owns two farms, leases another five and manages another property. It trains about 3000 people each year.

“We are working with the board, management, Tertiary Education Commission (TEC), NZQA, MSD, MPI and other agencies to provide the appropriate support for staff and students,” Ruscoe says.

“Students will be contacted by Taratahi, the TEC and other providers and will hear about the options available to them for continuing their education.”

According to the liquidator, Taratahi is facing financial and operational pressures caused by declining student numbers, resulting in funding cuts. It has spent a lot on student support and learning, and has reduced its operating expenses.

However, Grant Thornton International says despite government subsidies and cashflows from its farming operations, the costs of educating each student still exceeded the funding based on its operating model.

Taratahi chair Mavis Mullins says the decision is distressing for the staff and board, which would have celebrated 100 years in 2019. She says the board considered the interim liquidation as the most responsible decision to protect its staff, students, creditors and other key stakeholders.

“Our main concerns are for our students, staff, animal welfare and our creditors and partners,” she says.