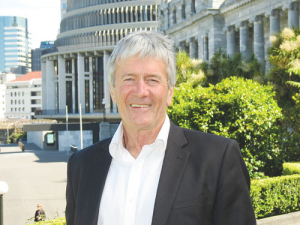 He’s just returned from a fact-finding trip to Europe and says what he saw there reinforced his view of the need for such a plan. Everywhere else they talk of food strategies, not farm production strategies, because they acknowledge they are producing food.

“We need to do the same and it will be role of the Primary Production Council, which I hope to have up and running around April, to facilitate that strategy and make it happen. It’s a matter of making sure we get best people on that council,” he told Rural News.

O’Connor attended one of the biggest agricultural trade shows in the world – Green Week in Berlin attended by 65 ministers of agriculture, some of whom he met.

“It was networking and to re-emphasise that NZ would like to pursue a free trade agreement with the European Union (EU).  I met ministers from France, Germany and  Poland, to name a few .They want to conclude a deal with South American countries known as the Mercosur Group, but they are keen to start negotiating an FTA with NZ after that.”

O’Connor says they were positive about NZ and noted that we had reviewed our trade agenda and that it was an inclusive and progressive one that aligned closely with EU countries’ views of trade agreement. He thinks NZ is well placed to progress towards an FTA with the EU.

He re-assured all the ministers he spoke to that NZ wasn’t seeking to exploit the unfortunate situation over Brexit.

“I told them we were just seeking to confirm our ongoing access and some flexibility into their markets. I told them that retaining flexibility means product will go to the market that needs it, not end up being excess to demand where everyone selling into a market would lose out.”

O’Connor didn’t meet with UK ministers because they are too preoccupied with sorting out their Brexit exit, which he describes as “a bit of dog’s breakfast”.

“But I did go to Ireland and met with their Deputy Prime Minister, the Minister of Agriculture and Irish farming leaders. They are not so enthusiastic about us, but again understand that as countries we both need to trade and that if we continued to reduce the barriers to trade both NZ and Ireland would be better off.”

O’Connor says setting up an NZ embassy in Ireland and an Irish embassy in NZ is a great step that acknowledges the strong heritage links between the two countries.

He also visited Denmark and Spain and says these countries appreciated the opportunity to discuss trade issues.

Minister of Ag Damien O’Connor is confident the government can work together with farmers to improve water quality.

Agriculture Minister Damien O’Connor says he would like to seem more emphasis on sustainable growth of the value -- rather than volume – of New Zealand exports.

Change or no change?

Ministers are “working on proposals” for revamping the Ministry for Primary Industries, says the Minister for Agriculture Damien O’Connor.