Alliance back in the black 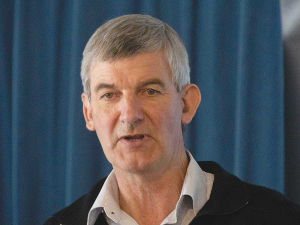 Co-operative meat processor the Alliance Group will be returning profit back to its farmer shareholders this year.

Chief executive David Surveyor has told a meeting of farmers on Banks Peninsula that when the result is published later this year, the profit will be “meaningfully up”.

“Think about it as returning to the level of profitability that you would expect for a company of its size,” he said.

Unlike last year, there would be a pool payment made, although he could give no figures.

Surveyor says it was a matter of getting the balance right between profit redistribution and reinvestment.

He told the meeting it was a fundamental challenge for all the processors in the sector to ensure they had enough “gas in the tank” to reinvest and move collectively out of the “commodity” space.

Surveyor was speaking at a meeting of the Alliance’s annual roadshow, in which the cooperative’s senior people report on its performance to farmers throughout its catchment area and to staff in its various processing plants.

He said a feature of the year was a huge amount of volatility in livestock pricing, with competitors being “consistently inconsistent” and farmers being offered lots of different prices even within a week.

It was a challenge to Alliance’s ability to manage in that highly volatile environment.

Surveyor warned that plant-based protein was growing exponentially, albeit from a “very, very small base”.

“At the moment it’s having no impact whatsoever on the ability of Alliance Group to position red meat and the price of red meat. So we’re not seeing any impact at all,” he told shareholders.

“What we are trying to do is position our business as the natural food space, and they are very much in the processed food space.”

Surveyor said a very pleasing development was its 50% acquisition (announced in March) of the Scales Corporation’s Meateor pet food business.

He says this represented a clear change in company strategy, to move up the value chain.

Alliance chairman Murray Taggart told the meeting that stock numbers were down significantly but despite that Alliance had ended up in a “very sound” profit position.

“There’s still a heap of stuff we can do to get more value out of the business and return it to you as farmers. We are absolutely determined we are going to capture that and deliver it back.”

Taggart said the board’s perspective was that it had made good progress but there was a lot yet to be done.

He said the last few years the co-op had been working to get costs out of the business, which was now moving much more to the value-capture stage.

“It’s a lot more fun playing in that space,” he added.

However, Taggart warned that there was a significant “wave of compliance” coming, for farmers and the business.

Banks were looking like having to hold more capital in support of rural loans. “We’ve seen the demise of the interest only loan and now it’s interest and principal – so that’s more cash going out of farming businesses,” he explained.

“Then we’ve got the emissions trading scheme, which will come with a cost to farming.

Taggart said it is important for farmers to get in and do what they can to mitigate their environmental footprint where practical and financially viable. “There’s not much point in waiting till you’re forced to by the rules.”

He said it was important for farmers to turn out, and keep turning out, to consultation meetings and to put in their submissions on legislation.

“I know it feels like an effort, but Beef + Lamb NZ and Federated Farmers have got some templates to make it a lot easier.”

Taggart said Alliance, as a company, believes strongly that we must care for the environment

“But that’s got to be balanced. Balanced with care for farming and farming communities. You can’t have one without the other.”

Making it OK to ask for help

Meat processing company Alliance has started an employee support programme aimed at getting colleagues to look after each other and keep an eye out for possible mental health issues.

No issues for us

Claims of trouble at Alliance

Big staff rumblings, safety issues and the likelihood of yet another poor result are claimed to be unfolding at the Alliance Group.