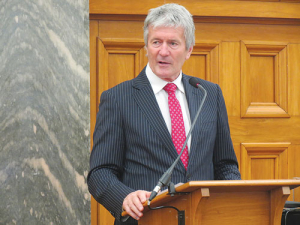 A rushed change to NAIT regulations has caused growing disquiet about the haste in which the new laws were passed under urgency in Parliament.

The farming industry at first publicly welcomed the changes: DairyNZ and Beef + LambNZ approved, although Federated Farmers said they were rushed.

Many people have told Rural News that they question the hastily enacted new laws and some of the new powers given to MPI.

The most contentious change now allows biosecurity officials to enter farmers’ properties – including the farmhouse – without getting a warrant, and they may seize anything they want.

The response to M. bovis has highlighted problems in the National Animal Identification and Tracing scheme (NAIT) that should have been fixed years ago.

He says this was because farmers were not registering animal movements and compliance enforcement to ensure use of NAIT was lacking.

Changes passed under urgency in parliament align the NAIT Act search powers with the Search and Surveillance Act; they make it clear that all animal movements must be declared to NAIT even if the new location is not a registered NAIT location. Farmers will be held to account if they do not declare those movements to NAIT.

The new regulations also allow biosecurity officials to search farms and take documents without a warrant; this is causing most of the angst among farmers.

However, O’Connor claims the changes go no further than powers that already exist under other acts, which allow officers to lawfully obtain information where non-compliance is an issue.

The new regulations also make M. bovis a notifiable organism under the Biosecurity Act 1993, meaning people who suspect the presence of the disease in a new location must report it to MPI.

“Prompt reporting is necessary to eradicate the disease and a well-functioning NAIT is a key part of our efforts to protect our vital primary industries from pests and disease,” O’Connor says.

“Farmers and industry have been asking MPI to increase compliance so that people who are not complying can be held to account.”

BLNZ says the passing of the new laws on NAIT were necessary because it is critical to be able to trace movements of animals between farms in the event of a biosecurity incursion. It also says effective compliance forms are an important part of that process.

“Those farmers who work hard to comply with NAIT requirements have increasingly been asking for stronger penalties and compliance actions against those who put the industry at risk,” says BLNZ’s Dave Harrison.

“This will give them confidence that some action is being taken.”