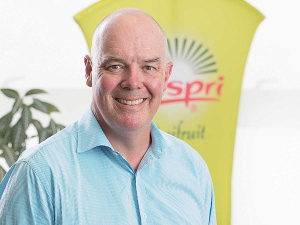 Zespri’s chief grower and alliances officer, Dave Courtney told Rural News that the feedback from growers on the state of the vines is very positive.

He says towards the end of last year, flower numbers and pollination was looking good. He’s heard nothing that would suggest there were any problems.

This news comes on the back of a good season for Zespri, which for the first time saw more gold kiwifruit sold in the market that the traditional green variety. Courtney says that the higher price paid in the market for gold meant that grower returns were better than in past years.

And with more gold being planted, all being well, returns to growers will continue to increase.

“Last season saw volumes slightly down on the previous season and the size of fruit was also smaller. But the quality was better and the season started earlier which allowed us to put strong volumes into the marketplace and that continued throughout the year.

Courtney says Zespri plans to release more licenses for Gold this year and for the coming two years. He says there is good demand for the fruit based on market signals and Zespri has to be nimble enough to manage the growth in demand. But he concedes that there will come a point when this may slow.

Courtney adds that work is also being done in the plant breeding programme to develop a green kiwi fruit which is ‘ready to eat’ when it reaches supermarket shelves.

Is Red the new Gold?