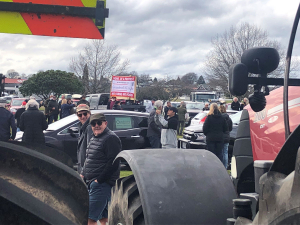 Protesters at the Howl of a Protest in Taupo.

This was announced at the Groundswell protest in Morrinsville where over 2500 people backed by 250 tractors and 100 utes took part in a rally.

There were calls for the Government to review its policies around farming, especially those related to sustainability and water. Tradies are also unhappy with getting hammered with a clean car tax on utes, vehicles considered an integral part of their job.

Waikato farmer Andrew McGiven was one of the speakers at the Morrinsville rally.

He says the country and farming folks are fed up with Wellington imposing badly thought out policies on them.

The nationwide protest saw thousands of tractors, utes and other farm vehicles driven through main towns.

In Levin, about 50 tractors and over 200 vehicles took part.