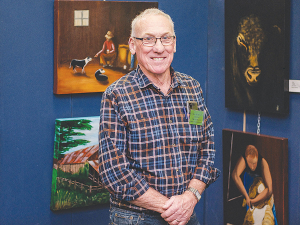 Feilding-based farmer Graham Christensen has carved himself out a new career a new and successful career – as an artist, painting rural scenes.

A warning from his wife not to hang around the house and get under her feet when he retires has prompted a Feilding-based farmer to launch himself into a new and successful career – as an artist, painting rural scenes.

Seventy-three year-old Graham Christensen was brought up on a farm and as a youngster helped with shearing and the like before eventually doing a degree at Lincoln University.

His first job was with the old MAF where he managed the sheep breeding programme on Mana Island, near Wellington.

After that, Christensen went dairy farming in the Manawatu, spent time on the staff at Massey University before he and his wife headed over to Australia to – of all things – run a tourist resort on the Gold Coast. But after 10 years of what he describes as a great time, the prospect of retirement loomed as did the warning from his wife to take up an interest.

“She suggested that I take up art, which is something I’d never had any interest in before,” Christensen told Rural News. “Anyway, I followed her direction and did some art classes and after the third one, I was absolutely hooked and joined the art groups on the Gold Coast and learned the craft.”

In 2017, he and his wife returned to NZ and bought a life sentence block (AKA a lifestyle block), which just happened to have a hay barn that had been converted into living quarters and Christensen quickly staked out a room for his art studio.

“It is absolutely magic because I can shut myself away and become totally absorbed in what I do and no one can bother me,” he says. “I realised that my biggest interest and love in life was farming so I focused on that with paintings of dogs and stock and woolsheds.

“For some reason people love woolsheds because every shed has a story and people can relate to that and tell me buzzy stories about their family woolshed. I paint shearers around the sheds and dogs on utes,” he adds.

But not so long ago, Christensen had a life-changing moment when he was diagnosed with prostate cancer and had to undergo radiation treatment. He says it made him think about life, and between treatments he took time out to visit the farm of his son and daughter-in-law in the Pohangina Valley, just out of Palmerston North.

“It’s your typical hill-country beef breeding farm with a beautiful gorge running through it and I used to spend time just sitting there enjoying the sounds of the river and birds,” he explains. “It was part of my therapy for the radiation treatment but it got me thinking on how I might help others. It also took me in a new direction in terms of painting and I started focusing on rural scenery.”

Christensen met up with Judy Jack, a member of the Manawatu Rural Support Trust, and that prompted him to make an offer to donate a painting which the Trust could sell to raise funds.  The first painting sold quickly and recently he has staged an exhibition of his works in Feilding, and another artwork – Ready for Shearing – has been donated to the Trust.

For Christensen it’s been a long and colourful journey, mixed in recent years with personal challenges. But his love of the land and the people of the land has never faltered and this passion shows in his amazing artistic creations.

After completing his degree at Lincoln University, Graham Christensen's first job was with the old MAF, where he managed the sheep breeding programme on Mana Island, near Wellington.

This role came at a time when the Government in the late 1970s and early 1980s imported various overseas sheep breeds such as the Finnish Landrace, East Frisian and Lincoln. The idea was to mate the imported sheep with the local Romney flock to improve fertility, milking capability and conformation.

A Gisborne based project is exploring an organic method of dealing with pests on citrus orchards by understorey planting to attract beneficial insects.

Wiping out those weeds

Over the years, Ashburton-based Rotowiper has pursued one main objective – to design and manufacture an effective, cost-efficient method of controlling/eradicating weeds in pasture and crops.

Benefits many and varied of reducing soil compaction

For many years, reducing soil compaction has been recognised as an efficient way of increasing production for grassland and arable operations.