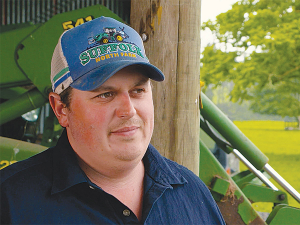 Taranaki dairy farmer Robert Buchanan says Flashmate is a solution that delivers results without the stress and at an affordable cost.

According to the makers of the Flashmate heat detector, anxiety over `lost milk’ from missed heats and poor-quality submissions can drive up stress levels on farm.

Robert Buchanan farms 280 cows at Inglewood and faced a steep heat detection learning-curve some years ago. He says Flashmate is a solution that delivers results without the stress and at an affordable cost, which has been using for many years now.

“Our empty rates have dropped a lot. Last year we didn’t have any empty two-year-olds and I had one empty three-year-old, so something’s obviously working for us,” Buchanan says.

He was determined to make a step up in performance from tail paint, without lifting farm costs long-term.  This was important, given the possibility of future down-turns which can extend or even eliminate the payback on higher-cost commitments.

Next came considerations of training and staff requirements, along with effort to interpret data needed to make your own final heat decisions.  With long-term resilience in mind, he opted to keep it really simple.

“We’ve trialled collars and found Flashmates are a lot more attainable in terms of cost.

“It all corresponds, they fit in well with a system like ours.  We try to keep costs down and I‘ve used them six years in a row.  There’s no lying with it really, it’s either on or off.”

In winter weather, cows may be cycling, even if they’re not making this obvious to the team.  Silent heats drag down submissions, impacting six-week in-calf and empty rates.

“We’re picking up silent heats with hardly any marking on tail paint. You’re definitely picking up more cows earlier and picking up those cows that you’d normally miss,” says Buchanan.

“Flashmates are another visual thing you can say, ‘that cow, she’s definitely not on’ [so] you don’t put that cow up for AI, so you’re not getting that embryonic loss.”

A Gisborne based project is exploring an organic method of dealing with pests on citrus orchards by understorey planting to attract beneficial insects.

Wiping out those weeds

Over the years, Ashburton-based Rotowiper has pursued one main objective – to design and manufacture an effective, cost-efficient method of controlling/eradicating weeds in pasture and crops.