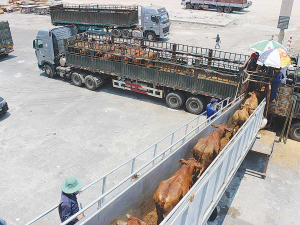 Emanuel Exports has had its licence reinstated after a three-year suspension.

Australia's largest live sheep exporter, Emanuel Exports, has had its licence reinstated after a three-year suspension.

The company's licence was cancelled following the deaths of 2,400 sheep aboard the Awassi Express in 2017.

The incident also led to a temporary ban on live sheep exports to the Middle East and prompted an ongoing ban on exports during the northern hemisphere.

The Department of Agriculture and Water gave the green light for exports to resume from December 3, it says the company had now "sufficiently rehabilitated itself so as to resume its status as a body corporate of integrity".

The department also says it had since strengthened regulations by implementing a ban on export shipping to the Middle East during the hottest part of the northern hemisphere summer.

Shape up or ship out!

OPINION: Damien! What were you thinking, banning the live export trade?

Aussies expect to cash in on NZ's loss

Australian livestock exporters are optimistic of securing more business as New Zealand winds down its trade over the next two years.

Live exports dead in the water

Concerns about the threat posed to New Zealand's trading reputation by live animal exports from this country have led to a move to shut down the trade.