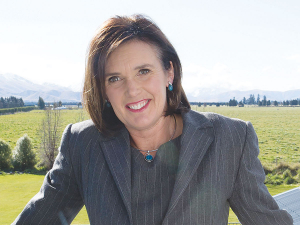 South Canterbury farmer Leonie Guiney has been re-elected to the Fonterra board for another three year term.

"I'm ecstatic because of what it means for Fonterra," Guiney told Rural News.

"When farmers in a co-operative unite behind a board and management team, any future challenge is surmountable - provided we hear their message," she says.

"What I hear is 'move in a direction that builds on the collective strengths of NZ dairy farmers, think long term, and we have your back'.

"That message should not be forgotten."

Guiney says board chairman Peter McBride deserves a lot of credit for this outcome. McBride and mid-Canterbury farmer John Nicholls were also re-elected for another term.

On behalf of the three re-elected directors, McBride thanked shareholders for their continued support at the co-op's annual general meeting in Invercargill last week.

While the three sitting directors weren't opposed, an election was still held as new rules stipulate a successful candidate must get over 50% of the votes to get elected.

Guiney has served twice on the Fonterra board - for three years between 2014 and 2017, before returning as an elected 'non-assessed' candidate in 2018.

Guiney says her priorities as a board member haven't changed.

"Our offshore competitiveness should be our focus; our on farm comparative advantages underpin that.

"We need to enhance, not erode that, and bring the New Zealand public and Government with us."

"Thanks to all who voted. In doing so you have exericed your right," he told the annual meeting.