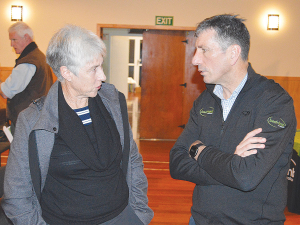 However, former Federated Farmers Auckland president Wendy Clark told the meeting that "there was a lot of throwing under the bus" during the Plan Change 1 consultation process.

Plan Change 1, introduced by Waikato Regional Council, is about reducing the amount of contaminants entering the Waikato and Waipā catchments.

"It doesn't help anyone when one part of our industry throws another part under the bus," Clark told the meeting. "I get thrown under the bus every time because I pay three levies: dairy levy, beef levy and the Federated Farmers levy."

Clark called on farmer organisations to work together.

"We want you to work together," she says.

Another farmer Bruce Cameron wanted to know why BLNZ was still pursuing Land Use Capabilities (LUC), which he said provided one group of farmers an advantage over another group.

McIvor said he heard the message to work together "loud and clear".

He told the meeting that BLNZ was working with DairyNZ and Federated Farmers to find methods that will work for all farmers.

McIvor says apart from working with DairyNZ, Feds and Deer NZ in the first instance, the Farming Leaders Group has also proven to be effective.

The group is made up of chief executives of industry organisations, representing horticulture, wine, forestry, irrigators, dairy companies and the Meat Industry Association.

McIvor claims that by working together, this group can have more influence.

McIvor points out that over the last 10 years more than 70% of BLNZ's work has been done jointly with DairyNZ and Feds - such as R&D, training, advocacy, extension work and policy work.

However, he admits that what the organisations haven't done well is communicating to farmers what was going on behind the scenes.

With farmers pressuring their industry-good organisations to work together, there is "added impetus" around that now.

"We have farmers saying that we have been on different tracks from each other on some key issues; they want us to sit and work out a joint way forward."