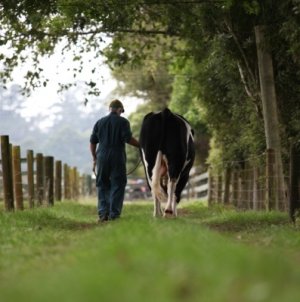 Farmer royalty will gather this month to acknowledge the best breeding brains, and bulls, in the country.

On April 17, Hamilton-based dairy farmer cooperative LIC will celebrate its annual Breeders' Day, hosting about 100 breeders from around New Zealand.

Those breeders will have contributed dairy bull calves to LIC (the country's largest dairy animal-improvement organisation). Initially the bull calves will have been hand-picked by LIC on the back of impressive ancestry records or the animals' DNA profiles.

Since then, the bull calves have gone on to produce semen that has resulted in some of the dairy industry's most-highly efficient daughters, known for their ability to produce excellent volumes of high-quality milk (as well as illustrating good temperament, health, fertility, and longevity).

The dairy industry commonly refers to this intergenerational progress as 'genetic gain'.

Independent research (Bill Montgomerie, New Zealand Animal Evaluation) shows genetic gain in the national dairy herd, over a 10-year period, is responsible for about 60% of the production gains made on New Zealand dairy farms.

So while bloodstock bloodlines of the racing industry attract much glamour and glitz, it's the people behind bovine bloodlines that can justifiably lay claim to the mantle of 'agriculture's economic powerhouse' in New Zealand. Estimates put the economic contribution of LIC's bulls to the dairy industry at $16 billion over the past 46 years.

"That's why top breeders of dairy bull calves are so incredibly important to LIC, and that's why we acknowledge the work they do and celebrate the animals they're producing for the industry," says Mike Wilson, LIC Premier Sires product manager.

Premier Sires is the brand given to seven teams of elite bulls owned by LIC.

Semen from Premier Sires bulls is artificially inseminated in to more than 2.5 million dairy cows each year (about 75% of cows milked on New Zealand dairy farms are sired by an LIC bull).

Wilson says scores of breeders in the industry make use of cutting edge technology to get top reproductive results. "To get a bull in a Premier Sires team is often the pinnacle of these people's careers. So Breeders' Day is about the achievements of each team and the individual bulls in those teams, as well as the people behind them."

To breed an elite bull is a long process, a process that can only happen with the help and support of these breeders, not to mention LIC's sire selection and farm teams, Wilson says.

"Nearly all farmers are constantly trying to improve the quality of their animals through better breeding, and LIC has literally millions of bull calves to choose from each year for eventual inclusion in one of its Premier Sires teams. Only about 120 bulls will make it each year."

On Breeders' Day the farmers – who have contributed to the Premier Sires team of last season – will be treated to a full-course lunch and parade of bulls at the Newstead Bull Farm, adjacent to LIC headquarters. They will receive a certificate and framed photograph, and hear about some of the latest developments in the Artificial Breeding industry.