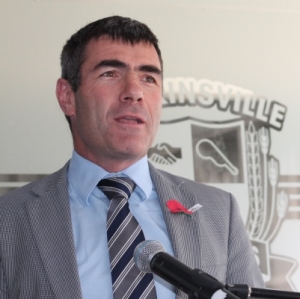 THE CABINET has signed off on the (Government Industry Agreement) Deed which Primary Industries Minister Nathan Guy says will be an important tool in strengthening New Zealand's biosecurity.

"Under the GIA, industry organisations and the Ministry for Primary Industries can sign a Deed that formally establishes the biosecurity partnership. Partners will share decision making, costs, and responsibility in preparing for and responding to biosecurity incursions," says Guy.

GIAs will give industries a direct say in managing biosecurity risk, says Guy.

"Biosecurity is a shared responsibility, and it needs everyone to be on board. I'm pleased that industry is keen to step up and contribute their time, expertise, and resources."

The Deed outlines the formal commitments that signatories make to this partnership, and was developed by a joint industry and MPI working group.

Horticulture New Zealand has played a key role in the development of GIA and the Deed.

"At times this has been a very difficult process for both industry and government," HortNZ president Julian Raine says. "But in the end, everyone appreciates we can't continue as we are. We need better biosecurity and by working together we think we have a better chance of achieving that".

Biosecurity protection is essential to New Zealand and is one of the biggest risks growers face. "The cost of a biosecurity pest or disease incursion can run into $100s of millions, it closes down overseas markets, hugely increases production costs and in some cases, destroys our ability to grow crops."

The idea behind GIA is simple – primary industry works with government agencies to establish what the threats are and how they will be dealt with, before they arrive.

"There is a catch, in that industry will now be expected to pay its share of the cost of this additional management. Some of our affiliated product groups will agree, some won't.

"The main thing is there is now the opportunity to get a seat at the decision-making table and some parts of horticulture have been calling for this for a long time."

Nathan Guy to retire from politics

Otaki MP and former Agriculture Minister Nathan Guy will not be seeking re-election next year and retiring from politics.