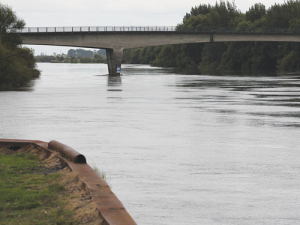 One of the problems with the proposed Waikato Regional Council’s Plan Change One is that it is mind bogglingly expensive to implement, says scientist Doug Edmeades, of agKnowledge.

“It needs to be thought through carefully in terms of ‘let’s pick off the low hanging fruit first’,” he told a Waikato Beef + Lamb NZ ‘Farming for Profit’ field day at Lochiel Station in Glen Murray.

Making him most anxious about Plan Change One is that the problem with the Waikato River, say water specialists, is not nitrogen but too much phosphorus, E.coli and sediment.

Edmeades made these remarks while explaining to the field day about nutrient movement and its impacts both on fertiliser policy and runoff into waterways.

He explained there are four contaminants that come off land that we need to be worried about: nitrate, nitrogen, phosphorus – in particular P, the phosphorus that is stuck on the particles of soil, so whenever you see soil moving it is carrying with it phosphorus – sediments which cloud up the water and pathogens, particularly E.coli which comes from dung and the urine.

“These are the four contaminants. It is important to recognise that the mechanisms by which these things get into waterways are different.

Nitrogen leaches through the soil; the other three contaminants run off the soil.

“So if you are going to intercept these things you’ve got to know which one you are dealing with.”

The South Waikato District Council has asked for a ‘science and technology gap’ to be bridged before sustained environmental improvements can be achieved beyond the first 10 years.

Shattock says South Waikato has a unique economic and community profile and the adverse economic and social costs if the current plan is implemented will hit the district hard.

The potential impacts such as job losses and infrastructure affordability on the district would be “significant”.

“Employment in dairy farming will be hugely impacted and this will cause a knock-on effect in the wider district which relies heavily on dairy farmers [for its survival],” she says.

A Waikato farmer has been convicted and fined $25,050 for carrying out unlawful earthworks in a stream on his Te Awamutu property in May and June 2020.

OPINION: As I write, our nation has returned to level 4 lockdown and it has given me time to reflect on all we have accomplished in the year since the COVID-19 pandemic hit this country hard.