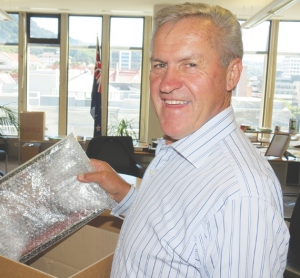 DAVID CARTER says his greatest achievement during four years as Minister for Primary Industry was bringing his cabinet and caucus colleagues to greater awareness of the importance of the agricultural sector to the country’s economy.

Speaking to Rural News on his last day as minister, before being elected as parliament’s 29th speaker, Carter says having got his colleagues on side he was able to get good support for money for irrigation and the Primary Growth Partnership scheme (PGP).

Other achievements he cites are water reforms including the Land and Water Forum process and funding for irrigation. He also believes biosecurity has been a success story.

“I believe the biosecurity system in New Zealand now is substantially better than in 2008 for two reasons: we have the border working more efficiently, and Customs and MPI are working far more collaboratively.

“The other thing we’ve successfully done is got industry engaged in being part of the solution to biosecurity. So the trust that’s developed between industry and MPI is substantially better than it was.”

Agriculture and politics have been a huge part of David Carter’s life. He was educated at St Bedes College, Christchurch, where he was head boy, and later at Lincoln University where he completed a B.AgSci. He started farming in 1972. His father was a Christchurch city councillor for nearly 40 years.

In his first farming operation, at West Melton, near Christchurch, in the early 1970s, he became involved in the embryo transplant business. This involved importing some of the new European cattle – breeds such as the Simmental and Charolais from the UK. Using embryo transplants he was able to breed cattle and export these to Australia. It was a million dollar business at the time.

His first taste of politics came in 1993 when he was farming on Banks Peninsular and Ruth Dyson was the Labour candidate. “I knew of other Labour locals who wanted to stand and they were just pushed over by the Labour hierarchy; so I said I’d challenge her. It was in the days when it was first past the post and the seat was strategic and we almost got there.”

However, Carter didn’t have to wait long for another chance to stand for parliament. A year later in 1994 Ruth Richardson resigned and Carter won the National nomination from 13 other hopefuls and was subsequently elected to parliament in August 1994.

“But agriculture is my passion. It’s something I think New Zealand is exceptionally good at. Our wealth is determined by the success of the primary industry sector.

“When I came into parliament I never aspired to be the Speaker; I don’t think many politicians do. But I did aspire to be the Minister of Agriculture. Once it was suggested I become the Speaker, I saw it as a tremendous opportunity and a huge challenge.

“When John Key formally approached me to take the job, I said I’d be delighted to do it.”

Carter does not see his new role as a sideways move and in fact is happy to see a new man – Nathan Guy – in the primary industry role.  He says the Prime Minister felt that he (Carter) was the best person in the national caucus for the role of Speaker.

Being Speaker means Carter will have to take on an unfamiliar apolitical role. He sees it as a bit like being a referee. He says Lockwood Smith was the best speaker he’s seen in his career and hopes to adopt a similar style, although he acknowledges his will be slightly different.

Carter admits he will miss the day to day contact with the ag sector and the honour of being the Minister for Primary Industry. But like his predecessor Lockwood Smith he’ll have more time to spend on his own farm.

“I still actively farm and I am looking forward to doing even more farming. As a cabinet minister you’ve got five to six hours of paperwork every weekend – so I won’t have that anymore. On Mondays I won’t have to rush to Wellington for a cabinet meeting, so I will have more time to farm.”

Carter also confirmed he plans to stand again for parliament in the election in 2014.

PRIMARY WOOL Cooperative's profit of $1.9m for the 2013 financial year is the largest in the cooperative's 39-history, says chairman, Bay de Lautour.