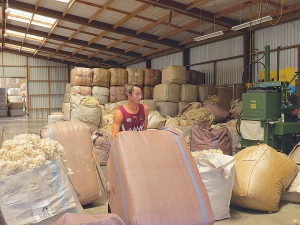 Cavalier says it will move away from the manufacture and supply of synthetic fibre carpets over the next 12 months and focus entirely on woollen and other natural fibres.

The listed company recently unveiled a new transformational strategy, saying it would transition away from the manufacture and supply of synthetic fibre carpets over the next 12 months and existing synthetic stocks would be sold down.

The company says the long-term dangers posed by plastics were becoming clear. It has cited “negative impacts on people’s health and the planet” from using synthetics. Cavalier points out that the average New Zealand home with synthetic carpet is similar to having 22,000 plastic bags on the floor.

The carpet maker’s decision to focus on wool comes on the back of the recently released Wool Industry Project Action Group (PAG) report saying that natural fibres were “on the cusp of a renaissance”.

Cavalier says it had always believed wool was the best fibre for carpet.

“Our vision was to become a leader in designing and creating desirable, sustainable, safe and high-performing natural interior solutions.”

The company says while its initial focus will be on woollen carpets and rugs, it will be seeking other partnerships in which it could leverage its design and manufacturing capabilities and the value of the Cavalier Bremworth brand to create new product categories.

The company says it had undertaken a review of its businesses and opportunities and had identified a “valuable and growing trend” from consumers seeking high-quality, natural and sustainable products in their homes and believed it was strongly positioned to meet that demand.

Cavalier added that it’s confident it will deliver better returns on investment for its shareholders and, while the transformation would take investment and time, the company had the infrastructure, capabilities and expertise to effectively manage the change.

Chairman George Adams says the financial benefits of the change are expected to be seen with a return to profitable growth from 2023 onwards, following an initial 12 to 24 months of investment as the business was reset.

Adams believes that, with the new strategy executed and as the economy recovers from Covid-19, the full benefits are expected to be realised from 2025 onwards.

Meanwhile, Cavalier says it’s evaluating a range of opportunities to fund the transformation, including the potential sale and lease back of some or all of the company’s land and buildings – which would require shareholder approval.

Meanwhile, Federated Farmers has congratulated Cavalier on the move.

“Choosing to concentrate on New Zealand-produced natural wool, with its superior durability, warmth, sound-dampening and fire-retardant qualities is a smart decision for any company,” says Feds Meat and Wool chair William Beetham.

Beetham says sheep farmers look forward to working with Cavalier on its strategy to inform consumers why wool carpets are the right choice.

“Customers will be demanding more sustainable carpet options.  It makes sense for companies to move their woollen products from the back of the store to the front window.”