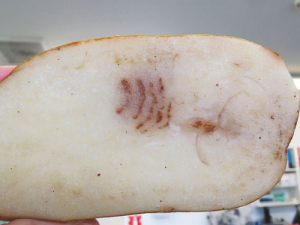 A potato with PMTV.

Tubers from two properties have tested positive for PMTV. Further sampling is underway.

Incident controller David Yard said this is the first time the virus has been found in NZ although it is common in other countries.

“Potato mop-top virus is a crop disease which, if found to be widespread, could cause productivity issues for growers. It is a notifiable and unwanted organism in NZ under the Biosecurity Act.”

Potatoes NZ chief executive Chris Claridge said the affected potatoes were of the Innovator variety used only for potato chips.

PMTV is not a food safety issue, but affected potatoes can display symptoms including distortions to the skin, deep cracking, and rust-coloured arcs, streaks or flecks in the tuber flesh.

“The industry is working with Biosecurity NZ to learn more about the virus, the impact it could have on growers and to stop any risk of spread,” said Claridge. “We will then consider if it is possible to eradicate it or whether we will need to work with growers to manage its impact over the long term.”

The Innovator variety was last imported as germplasm in July 2011. Biosecurity NZ is investigating how the virus may have entered the country.

PMTV is seed and soil-borne, vectored by Spongospora subterranea, an organism also associated with powdery scab. PMTV can be spread on seed tubers, in soil associated with boots, in machinery, and in waste from potatoes. Once established, the vector can survive for up to 20 years in soil.

PMTV was first reported in Britain in 1966 and has since been found in Europe, North and South America and Asia.

Potatoes NZ is warning growers to take care not to infest fields with PMTV from known powdery scab or PMTV-infected fields, and to avoid PMTV or powdery scab-infected seed tubers. Only certified seed tubers should be grown.