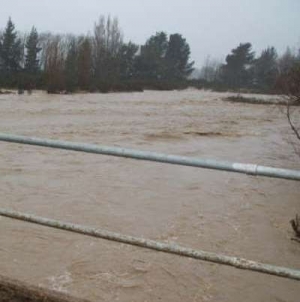 NORTHLAND AND WAIKATO are being warned of heavy rain, strong winds and storm surges  – but Cyclone Lusi may be welcomed by farmers, says a Civil Defence spokesman.

"It may in fact bring some welcome relief to a number of our farmers, who have been enduring very dry conditions for some time."

MacDonald says farmers with stock in low-lying areas will be making their own assessments of the latest forecasts about whether their animals need to be moved to higher ground.

MetService forecasters have issued a heavy rain warning for Northland, predicting the region may receive 70-100mm of rain, mainly about its eastern hills, in the 21 hours from 6pm today.

They're also forecasting easterly winds likely to rise to gale force and which could gust up to 120km/h (mainly about higher ground and in exposed places) from midnight tonight to midnight Sunday and of storm surges with swells for four to six metres along Northland's east coast.

MacDonald says the combination of these factors may cause erosion and flooding in low-lying coastal areas typically affected by such events.

The Waikato Civil Defence Emergency Management Group is closely monitoring Cyclone Lusi after MetService upgraded its alert for the weekend to a formal severe weather warning.

The Group Emergency Coordination Centre in Hamilton is activated in monitoring mode and will be staffed 24 hours a day over the weekend. Two staff will be on duty at all times, with other staff on standby to come on duty if the situation warrants.

Heavy rain (between 100 millimetres and 120mm) is now confirmed for the Coromandel Peninsula from early Saturday morning through to early Sunday morning.

Strong winds gusting to 130km/h are also expected for the Coromandel Peninsula and Kaimai Ranges from Saturday morning to late Saturday evening.

There is also a severe weather watch in place for the Central Plateau for strong winds.

The remainder of the Waikato Region is expected to be affected by strong winds and heavy rain. However, at this stage, these impacts are not expected to reach warning criteria.

"This scenario means there may be some localised rain-related issues, such as local flooding and slips, but the main risks will be from wind, particularly across eastern Waikato, including the Coromandel Peninsula and the Kaimai Ranges," says group controller Lee Hazlewood. "Rough seas will also be an issue to look out for along the eastern coastline."