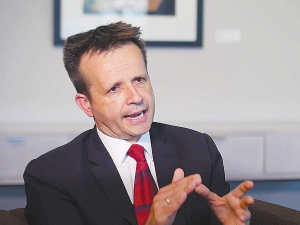 Ministry of Foreign Affairs and Trade deputy secretary Vangelis Vitalis says MFAT is ramping up its engagement and lobbying.

With the NZ Government rejecting a proposal to split the current quotas between the EU and the UK, talks are continuing with urgency between the three parties.

Trade consultant Stephen Jacobi told Rural News that time is certainly running out to do a deal before the end of year.

“The risk of commercial disruption to our trade in Europe is growing.

“Even if no satisfactory deal is reached before the end of the year we will need to continue to seek redress next year.

“It’s worth bearing in mind too that other trading partners are also affected by this action on the part of the EU and the UK.”

The UK is no longer a member of the EU and rules for the new UK-EU relationship, including trade, starts on January 1, 2021.  The NZ Government hopes to have an agreement in place with both London and Brussels by then.

Ministry of Foreign Affairs and Trade deputy secretary Vangelis Vitalis told a recent Beef+Lamb NZ seminar that the issue is preoccupying his team.

“We are continuing to work with colleagues in Brussels and London,” Vitalis told the webinar.

He points out that the legal rights around quotas were negotiated in good faith and any changes will require NZ’s agreement.

“At the moment we don’t agree with what London and Brussels are pursuing,” he says.

The EU and UK are proposing a split quota, which is strongly opposed by NZ. Jacobi says a split is unacceptable and calls into question the legality of the agreement reached between NZ and the EU in the Uruguay Round.

“The matter is already before the WTO.  If we can’t get satisfaction there is the option to take this to dispute settlement.  Thankfully the EU has subscribed to the ‘Multi-party interim appeal arbitration arrangement’ (MPIA) in the WTO.”

“The clock is ticking down on the transition period and we are ramping up our engagement and lobbying.”