Connection more important than ever in rural communities 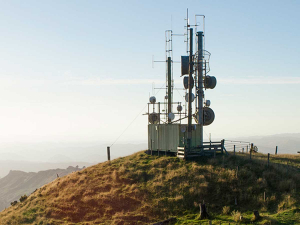 The East Coast Farming Expo Expo is a two-day mid-week gathering for sheep and beef producers with a focus on farming smarter.

Rural communications continues to lift to new levels in a world where connection and safety are key.

Two companies at the forefront of the industry are Colvins Communications and Gisborne Net and while both are involved with communications, they come at it from quite different sectors.

Colvins Communications, the largest suppliers of radios in the East Coast region, are all about connections on farms through mobile radios. “There are just so many different options when it comes to radios these days, says Colvins manager Scott McSloy.

That includes simplex – from one to the other – repeaters and a wide area network where repeaters are linked with each other.

“It is a real mix and it depends entirely on the requirements on each farm.” Single farms will often put in a single repeater where larger operations over multiple farms are more likely to have a wide area network.”

The big driver for Colvins is health and safety. The Health and Safety Act requires that workers must be contactable at all times when working. There have been numerous instances of workers injuring themselves but not being noticed as missing until many hours have passed.

“There are more and more audits from WorkSafe who will always ask ‘how are you communicating with your workers’. It is a key concern for our rural community.”

He says that while it is primarily health and safety requirements that has driven workers to be in communication with each other, many operations find after purchasing radios that having the ability to communicate is a valuable time-saving tool that they can’t do without.

McSloy and his team cover thousands of kilometres each year and will be on hand to chat at the East Coast Farming Expo. The Gisborne-based company has repeaters that can be loaned so people can trial the system to ensure it works as they would like. “It gives farmers a chance to try different hill tops to see where the best coverage is but generally farmers know their own farms well.”

As well as providing voice communication, radios now also have a lot more functions such as real-time GPS tracking as well as man down and lone worker alerts. Digital radios offer even more functionality for farmers including the ability to connect to wide area repeater networks and allowing one-to-one calling.

The East Coast brings with it plenty of coverage challenges, which is where Colvins Communications pride themselves in being able to assist with a wide range of on-farm communication solutions.

“While townies are able to use cellular devices to stay in contact, coverage is limited to city areas and/or State Highways. The East Coast brings with it plenty of coverage challenges.”

Their team of six technicians are available 24 hours a day, 365 days a year to sort any issues.

Gisborne Net, who has long been a leader and is credited with bringing the first internet service to the region in 1995, will also have a team at the Expo in February. Things have come a long way since then, none the least the speed of internet and the cost of delivery.

Company director Dave Parker says a multi-million dollar investment from Government into the wireless internet industry has been a big boost. “They have now recognised that WISPS (Wireless Internet Service Providers) are essential to delivering internet to remote communities.

Government funding has helped in pushing a high bandwidth internet backbone into the most remote of areas. “Technology improvements and better pricing enables the delivery of broadband to most areas quickly and effectively,” says Parker. “Business without internet is just not possible now and we’ve seen Government agencies, banks, education and other information services have all moved to internet platforms.”

There is more call for remote working facilities and entertainment, alongside VoIP (Voice over Internet Protocol) phone services. The internet has become an essential for rural communities, farms and businesses. There is a greater demand for remote working through the likes of Zoom. “Customers recognise that internet-sourced entertainment offers greater variety through Netflix, YouTube and TV on demand, at less expense than terrestrial and satellite TV services.”

COVID certainly raised awareness and usage and bandwidth demands due to streaming and business both increased markedly during lockdown. “While lockdown may have ended, the demand remains and actually continues to increase.”

Parker says the falling cost of high-tech comms equipment allows the team at Gisborne Net to deliver faster and cheaper internet – and that trend is likely to continue.

“Tairāwhiti is sparsely populated with many low income communities. Couple that with challenging geography and size – 20% of the North Island – and it brings huge service delivery challenges.”

But Parker says there will continue to be a growing demand. “The automation and tracking of farm activities will make the internet even more prevalent and essential for farming activity for things like more CCTV for farm security.”

The team at Gisborne Net will be at the expo with all sorts of information, including how to extend the net even more for remote communities.

The 2021 East Coast Farming Expo is a two-day mid-week gathering for sheep and beef producers with a focus on farming smarter. It’s held annually at the Wairoa A&P Showgrounds and includes exhibits, outdoor demonstrations and seminars. It’s a chance for farmers to talk one-one-one with industry innovators and leaders. It’s become a key go-to for the region’s farmers, as well as attracting some from further afield.