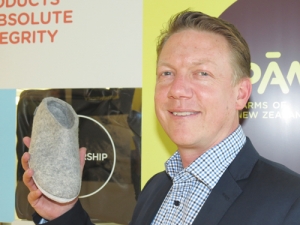 Landcorp chief executive Steven Carden with a slipper manufactured by the Danish footware company Glerups made from wool from the SOE’s farms.

Landcorp's profit has taken a massive hit in the past year mainly because of the downturn in the dairy industry.

For the year ended June, the state-owned farmer’s profit was just $4.9 million vs $30m the previous year.

But chief executive Steven Carden says in the circumstances the result is a solid one given that the company is suffering the same fate as other farmers.

A tough growing season and low lamb prices also contributed to the 11.7% drop in income from farm products.

But Carden says the result could have been worse had Landcorp not secured a significant volume of milk in Fonterra’s guaranteed milk price. Milk revenue was down from $129m last year to $88.1m, but livestock revenue was up from $98.7m to $111.3m this year, partly off-setting the drop in dairy income.

Carden says while the drop is not unexpected, there are some positives.

“We had a very good year in our livestock business with wool income up 11% and production is up across our lamb, sheep and beef operations, while beef prices have been very strong,” he told Rural News.

“Strategically the organisation has moved forward during the year and we’ve done a lot of work connecting with new customers. We have signed a couple of important contracts with the Danish footwear company Glerups which uses our wool to make high quality slippers, and the iconic brand Swanndri, which is also using our wool.”

The company has begun a sheep milking venture at Broadlands, near Taupo -- 3500 sheep on land formerly used for cows and  commercial forestry. A sheep milking expert from the UK is running the venture.