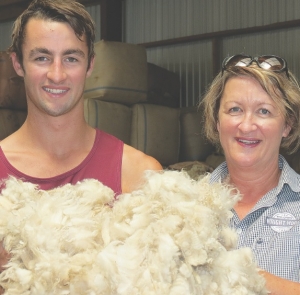 WHILE THE hot, dry weather that’s hit Hawkes Bay has caused grief to many sheep farmers, it’s been a bonus for wool.

Waipukurau wool broker Philippa Wright and her son Nick have seen excellent lambs wool come into their store in the past month. It’s been a good wool growing season, she says.

“We’ve had extraordinary wool growth due to the fabulous season this year for sheep. We’ve had an early season and no rain in December; that was our biggest December in my 16 years here. We had no rain so the shearing started at the correct time and they weren’t held up – they were shearing every day.”

Wright says the wool quality is really good. “The colour is great and there’s more and better grown wool because the sheep have had more feed through the winter.

“Only now are we seeing some seed come though the clip but normally by now we’ve got poor colour.”

Prices have been firm and Wright says they had an extraordinary peak in the first sale after Christmas for lambs wool. Strong wools have lifted, but not as much as people would like.

“Confidence has been ho-hum because they really want a couple of dollars a kilo more to make farming for wool genuinely worthwhile.”

Wright says with sheep prices dropping there’s a little more negativity towards wool production. Wool is still not a priority for farmers although generally the wool clip is well prepared.

“We’ve got good shed hands and a good system for harvesting wool so it’s pretty hard to mess it up from shearing to sale. Farmers by and large are breeding for meat and, while they are feeding their sheep well, you don’t have the same number of farmers selecting for wool as you used to. It’s there in the background but it’s not prominent as it used to be.”

Wright is optimistic about the future of wool. She says the product ticks all the boxes for the new generation of consumers looking for ‘natural’ products.