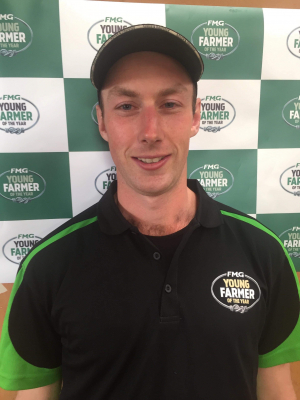 Allen Gregory, one of the eight Otago/Southland finalists

Jacob Mackie and Allen Gregory, who are both 25, will go head to head in the Otago/Southland regional final in Milton next month.

“I can’t wait. I really enjoy the challenge of competing. It pushes your boundaries and makes you work on your weaknesses,” said Allen.

The Nightcaps Young Farmers member is a stock manager at Stag Valley near Lumsden.

“Most of this year’s finalists know each other. I used to work with Jacob during his first stint at Mount Linton Station,” said Allen.

Jacob Mackie is now a stock manager at the 13,500 hectare privately-owned station near Ohai, which runs about 100,000 stock units.

Another one of the eight regional finalists – Linton Palmer – is Allen’s neighbour.

The hotly-contested Otago/Southland regional final is being held on February 16.

Contestants will tackle a series of gruelling practical and theoretical modules at the Tokomairiro A&P Showgrounds.

It will be followed by a dinner and fast-paced agri-knowledge quiz hosted by Te Radar at the Milton Coronation Hall.

“Hopefully I’ll be a bit wiser from the mistakes I made last year. This will be my last chance to make it through to the grand final,” he said.

Zac is the chair of Waitane Young Farmers and helps his grandfather run a 400-hectare farm at Charlton.

“Performing under pressure in the contest can change a simple everyday task into something that can be quite tricky,” he said.

The other regional finalists are Tom Blackmore, James Robson, and Matt McRae.

Tom Blackmore, 23, is a block manager at Limehills Herefords in Roxburgh, which runs 13,000 stock units on 4000 hectares.

James Robson, 29, grew up in Balclutha is a shepherd on a 3500-hectare sheep and beef farm at Roxburgh.

He spent time in Australia sowing wheat, barley and peas, and harvesting sorghum.

Matt McRae, 30, is a former rural banker who now runs a sheep and beef farm in Wyndham.

The Otago/Southland event is the first of seven regional finals being held across the country between February and April.

The regional winners will face off at the FMG Young Farmer of the Year Grand Final in Hawke’s Bay in July.