Exploring emotions on the farm 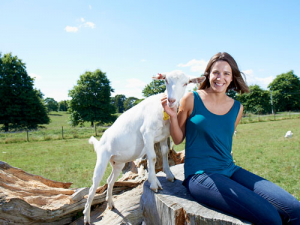 AgResearch scientists are doing some ground-breaking work into the emotions of livestock.

They are also looking at what this means for the way the animals are farmed.

With consumer expectations about the welfare of farmed animals increasing around the world, scientist Gosia Zobel and her colleagues conducted a trial into the positive emotional states of dairy calves – the first of its kind in which the anticipation of the animals around access to different environments and opportunities for play was monitored.

The data collected is now being analysed, but the work has already thrown up some interesting early impressions.

“We want to understand from a scientific basis what the animals are feeling by their behaviour, as opposed to just saying for example ‘look, the dog is wagging its tail, so it must be happy’,” Zobel says.

In the dairy calf trial – a project run between AgResearch and the University of British Columbia Animal Welfare Program - the animals spent periods of time in pens with different flooring and some featuring play items such as a rope. A small yellow light would flash prior to access being given to the different pens, and the level of anticipation in the calves was monitored.

Zobel says the level of anticipation at the sight of the flashing light, and the interaction with the play items, was much greater than expected by the researchers.

She has also recently led a trial involving adult goats to look at their behaviour in more natural environments than they were used to.

“We are trying to figure out what would they do if left up to their own devices, and had no restrictions placed on them from a human system, how would they behave. And then in the long run, how we could incorporate that into a human system.”

For example, when given the opportunity, the goats chose to climb onto an elevated platform, play on it, and to sleep on and under the platform, Zobel says.

“They also chose to eat from a high feeder, about 1.5m off the ground. Normally they would eat their daily ration at floor level in a feed alley, but it turned out they actually ate more when it was elevated off the ground.”

Zobel often speaks to farmers on the issues of animal welfare and behaviour, and has found it is something taken very seriously.

“I’m usually pleasantly surprised with not only how receptive farmers are to new ideas, but how often farmers ask questions that drive new research.”