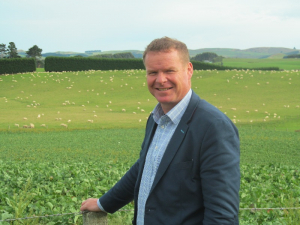 New Zealand farmer confidence has lifted for the second quarter in a row, the latest Rabobank Rural Confidence Survey has found.

This has been helped by improved sentiment among sheep, beef and horticulture producers. While farmer sentiment continued the gradual climb begun at the start of the year – following three previous consecutive quarters of decline - net farmer confidence remains at low levels, in overall negative territory, with more farmers pessimistic than optimistic.

The latest survey – completed earlier this month – found net farmer confidence lifted to -2% up from -9% recorded in March 2019.

The number of farmers expecting the performance of the agricultural economy to stay the same fell slightly from 55% last survey to 54% this quarter.

Rabobank New Zealand chief executive Todd Charteris said the more positive view farmers had for New Zealand’s agricultural economy was being driven by an improved outlook among sheep and beef farmers and horticulturalists.

“While, as with last quarter, there were still more sheep and beef farmers with a pessimistic view on the New Zealand agricultural economy than an optimistic one, the gap between them has closed considerably,” he said.

“Horticultural growers were also more buoyant about the prospects for the agricultural economy and, in a reverse of last quarter, more now expect to see economic conditions improve over the coming year, than those expecting them to worsen.”

The survey found dairy farmer confidence relatively unchanged from earlier in the year with roughly a quarter of those surveyed having an optimistic outlook on the 12 months ahead, a quarter expecting conditions to worsen and the remaining half expecting little change. Charteris said an improved demand outlook was the key contributor to the higher confidence among sheep and beef farmers and horticulturists.

“This is not surprising given sheep and beef farmers have seen demand for their products lift in recent months largely due to the devastating African Swine Fever outbreak which has crippled Chinese pork production and created new opportunities for New Zealand red meat producers in the Chinese market. Horticulturalists have also seen demand for their products strengthen over the last quarter with import growth occurring in a host of existing and new export markets, particularly for kiwifruit and apples.”

Among farmers with a pessimistic view of the agricultural economy, government policy remained the major concern, cited by 72% of farmers with a negative outlook on the next 12 months. This was back marginally on the 75% who held this concern last quarter.

“Since the last survey, we’ve seen the government categorically rule out introducing capital gains tax, with this likely to have come as a relief to most in the agricultural sector,” Charteris said.

“However, we’ve seen also seen the government recently introduce the Zero Carbon Bill proposing ambitious targets for gross methane reductions without the ability to use on-farm planting to directly offset these reductions. And this is a concern for some farmers.”