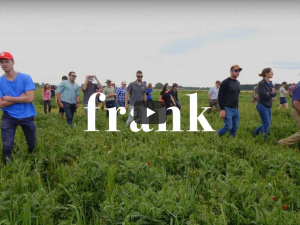 More than 70 agriculture professionals showed up to the day held by cropping farmer Simon Osborne to learn about the potential environmental and financial benefits of regenerative farming.

Many farmers expressed how they were eager to take what they had learnt and put it into practice.

Osborne is passionate about regenerative farming, growing as many as 15 plants in a paddock for better soil functionality.

He says he keeps the ground covered at all times, with no tilling, and this helps to keep carbon in the soil and reduce greenhouse gas emissions.

The practice may also reduce costs. Regenerative farming consultant Jono Frew says he has walked on to farms and saved them 30% on inputs.

Osborne says he hasn’t used broadacre insecticides since 1992. One regenerative farmer at the field day says he hasn’t put on fertilizer in 4-5 year.

Watch the video below.