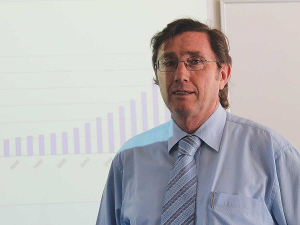 Farm Consultant Phil Journeaux says the pressure is on farmers with the advent of all the new water, animal welfare and labour regulations.

Leading farm consultant Phil Journeaux, of AgFirst, told Rural News that farming is a complicated enough business as it is. But he says the compliance cost on farm - in terms of time and paperwork - is growing rapidly and with the advent of all the water, animal welfare and labour regulations, the pressure is on farmers.

"I have been doing a lot of work in the last few years around greenhouse gas emissions, which is very complicated and this has yet to really hit farmers," Journeaux explains.

"I don't think they (farmers) understand how much paperwork and compliance they will be required to do. This whole compliance thing is becoming a really big component of farming and that's why a lot of farmers are reaching for advisors to help them work it through."

Therein lies the challenge. It is well-known that there are insufficient farm consultants that are fully trained to meet what is expected to be a huge influx of demand for the likes of Journeaux and other experienced farm advisors.

Recently, Agriculture Minister Damien O'Connor announced that the Government was investing $25 million to "expand and strengthen the primary sector advisory services to ensure farmers and growers have access to the highest quality farm planning support and advice".

"Employers hiring new advisers, or upskilling existing staff, could receive up to $22,500 annually per adviser to help cover salary and training costs," he said in a statement. "A career pathway scheme will focus on growing the diversity and number of advisers, with an emphasis on attracting more women and Māori into roles."

Journeaux says the announcement is quite exciting because there is an issue with capacity in term of consultancy and advisors working with farmers through all the new plans that are being put in place.

He believes that up until now, consultancy firms have been reluctant to hire large numbers of graduates because of the cost of paying them plus the cost of allocating a senior advisor to work alongside trainees until they are able to work by themselves.

"I think what the Government is offering will go a long way to assist that," Journeaux adds.

"In the past we might have taken on one or two graduates each year; now we can look at picking up four or five and that I think would be much the same across most of the consultancy firms."

But he is quick to point out that it could take up to three years to have new graduates fully trained. Journeaux says the graduates get a good theoretical grounding at university, but this knowledge has to be translated into what is practically needed on a farm.

He says they can only learn this by working alongside an experienced consultant to see how they handle the situation.

"It's a case of how do you put all that together in a package that farmers can work with and make sure the farm business is viable at the end of it? To me, that is a practical skill you learn in the field rather than in a lecture hall at a university."

Journeaux says the aim is to get about 100 more people qualified to help farmers with their various plans. He says farmers need to have trust in consultants and respect their advice and this is about experience which takes time - hence the three year time lag to get the new advisors up to speed.