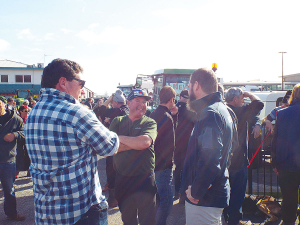 Farmers and tradies gather in Morrinsville before they took to the streets in their tractors and utes.

Fed up with ongoing government regulations, many thousands of farmers, rural contractors and tradies joined the Groundswell NZ protest, clogging up traffic in towns and cities across NZ and gaining strong support from onlookers. Rural News reporters were in a number of these centres and their reports follow...

The people of the Horowhenua rural town of Levin came out to cheer on a huge turnout of Groundswell protestors, as they drove down the main street of the town.

According to locals, it was the largest protest they have ever seen, with the vehicles taking nearly an hour to pass down the main street.

The protest was led by about 30 tractors followed by at least 200 utes and other vehicles.

Those taking part in the protest came from various towns around the Horowhenua and Kapiti Coast, but there were others who came from as far away as Taihape to take part in the protest. As well as farmers, there were rural contractors, other rural professionals and trades people. Their concerns ranged from the way the environmental reforms are being rushed through by government without proper consultation, to the ute tax, which was seen by all as an outright attack on rural NZ.

Denis Collins says he saw this is an opportunity to put a stake in the ground because some of the government regulations are quite blunt and not really fit for purpose. He says the objective was to make a statement and says to the challenges lie within the communities.

"The 'we know best from Wellington' is not usually the best way," Collins told Rural News.

When told about reports by Labour MP Kieran McAnulty that the Groundswell movement "didn't represent farmers", people just rolled their eyes in disbelief at his remarks.

Even Auckland's southern motorway saw numerous tractors heading into the CBD from Pukekohe, Drury and the Franklin district.

While northern satellite towns of Orewa and Warkworth became a sea of tractors and utes.

A big rally was also held in Morrinsville and organiser Lloyd Downing reckons around 1,100 people, 90 tractors and 50 utes turned out, and the mood was very positive.

He says farmers are questioning what organisations like Fonterra, Beef+Lamb NZ and DairyNZ are doing. It is understood that staff from these organisations were told not to attend the protests.

"They claim to be having regular meetings with Government but are not taking the farmers' messages to Wellington," Downing says. "They seem happy to be in the tent looking out... perhaps they should be outside with the people who pay their wages and throw a few bombs into the tent."

Waikato Federated Farmers president Andrew McGivern told the Morrinsville crowd that everyone is feeling overwhelmed by a host of poorly thought out policies.

"Farmers are fed up with the 'we know best; one size fits all' mindset of the current Government."

Meanwhile, Timaru's main street morphed into a slow-moving, two-and-a-half tractor and ute parade, with an estimated 700 tractors and 1,500 utes taking part. Crowds of people lined the street to cheer the farmers on and voice their support for the protest.

"It was way ahead of our expectations. It was massive and shows the feeling that there is and it's right across South Canterbury."

Small said farmers, growers and producers that power our economy are some of the most efficient in the world.

"We have been carrying the economy through the Covid pandemic, with the help of our tradies and service industries. We have a very good reputation in our markets and have a pretty good story to tell.

“We want clean air and water like every New Zealander does, but regulation, over-taxing and farmer bashing won’t achieve this.”