Farmers under the microscope 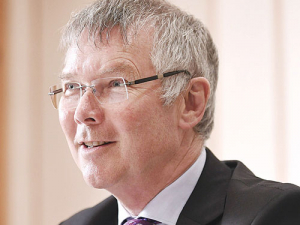 Farming has been under the microscope this month with three heavyweight Government reports — on water quality, climate change and Mycoplasma bovis — all appearing in just three days.

Federated Farmers vice-president Andrew Hoggard quipped that his response to these challenges was to think about sitting back on the dole and saving the planet that way.

Hoggard says it’s like trying to fix a plane while it’s flying: as well as meeting the new challenges in water quality and climate change, things have to keep going on the farm.

“We are expected to meet all the new regulations and do all the other stuff on the farm such as ensuring that the effluent system is running properly.”

He says farmers are annoyed at coming under pressure while district councils consistently get let off the hook for not meeting environmental standards, and he doesn’t see this changing.

“Clean water is our birthright. Local rivers and lakes should be clean enough for our children to swim in and put their head under water without getting crook,” says Parker.

The Government has effectively scrapped the Land and Water Forum (LAWF) and replaced it with three advisory groups: a science and technical advisory group chaired by scientist Ken Taylor, a fresh water leaders’ group headed by John Penno, and Kahui Wai Maori chaired by Kingi Smiler.

The Government is also planning to have a new National Policy Statement on Freshwater Management completed by 2020 to provide clear guidelines for regional and district council policies and rules on freshwater.

DairyNZ chief executive Tim Mackle says his organisation supports the Government initiative and says dairy farmers are already solving the issues, for example by greater use of stand-off pads and planting of wetlands. But he also acknowledges the impact the dairy sector has had on the land and says it will take time to fix the historical issues.

Predictably Greenpeace has called for a ban on new dairy farms and an immediate end to any more intensification of dairy farming.

Meanwhile, farming made the headlines in a report by the Inter Governmental Report on Climate Change. The report noted that 43% of NZ’s greenhouse gas emissions were caused by methane – livestock burping and 11% nitrous oxide -- and by cows urinating. The lead author of the report, Professor Bronwyn Hayward, Canterbury University, says NZ must think hard to be competitive and to be seen globally as good citizens and modern farmers.

The report has been described as a wake-up call pressing a need for urgent action to reduce, not just stabilise, GGH emissions. Hoggard says the requirements of the report are challenging even given the technology that may or may not be available.

“This is all fine but it would be a helluva lot easier for farmers if there weren’t all the negative comments all the time. A pat on the back would make you think ‘well there is a lot to do but at least people respect me for doing it’,” says Hoggard.