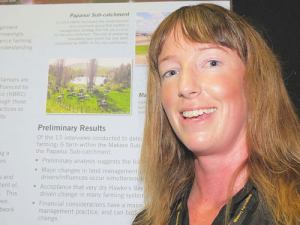 That’s one of the interim findings of Charlotte Drury, a land management team member at Hawkes Bay Regional Council (HBRC) researching the most effective way to communicate with farmers to get them to change their attitudes and behaviours on the issue of water quality.

Drury’s findings, presented at the recent Fertiliser and Lime Research Centre workshop at Massey University, suggest that the ever-popular farming magazines, such as Rural News, are among the most effective communication tools -- but not social media.

Drury has so far interviewed sheep and beef farmers in the Tukituki River catchment in Hawkes Bay as part of her research project for the HBRC.

“Most say they read the farming papers. When I ask about the internet they say they might go online, but only if they want specific information,” she says.

“They are not going on to trawl the regional council’s Facebook account or Twitter…. Even younger guys, who have taken over the farm and are potentially more tech savvy, again say this social media is not reaching them.”

Drury is trying to persuade farmers that good agricultural practice – aspects of land management -- can effect water quality, and they can make beneficial changes to those. Her work is focused on sheep and beef farmers, not dairy farmers.

She says councils face a challenge in trying to get near the top of farmers’ priority lists.

“Farmers have to deal with a huge range of other challenges; in the case of Hawkes Bay drought is a major one. There are others – such as markets for their products – and my suspicion is that the regional councils’ rules and regulations are pretty low on their priority list when they thinking about what they do day-to-day.”

Drury’s research is to understand how farmers make decisions, who they talk to and seek advice from, and who they trust in looking at making change. She says the council must discover how to tap into those networks or relationships.

She says dairy farmers in the Tukituki catchment are well connected via their day-to-day relationships with Fonterra and information flow from DairyNZ; but sheep and beef farmers don’t have those strong networks.

Drury says money seems to be lacking to get the messages across to sheep and beef farmers, partly because they are geographically isolated, unlike former days when MAF farm advisors used to come up their driveways, which helped them connect better to what was happening in the wider industry.

“This doesn’t happen anymore and is a common complaint from many farmers.”

She has discovered that many are at least second- and, in some cases, third-generation farmers. So they know a lot about their farms, but need a trigger, e.g. a farm advisor or fert rep, to get them thinking about change and the potential benefits of that.

Another issue that can affect change is the age of the farmer.

“Age might mean some people getting older and unable to physically do as much as they used to may not be keen to change. They have done things a certain way for years and believe that is still effective.”

However, Drury says some change is taking place in the hill country: more farmers are measuring soil moisture, nutrient levels and soil quality.