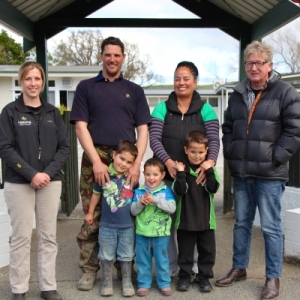 A fertiliser company is teaming up with farmers to help rural schools.

Farmers throughout New Zealand were invited to support the Hatuma Dicalcic Phosphate Ltd 'Growing Minds' fund by nominating a school and in return Hatuma donates money to that school.

Over the last five years the company has donated over $25,000 to rural schools through the programme.

"Every little bit helps in a small school like ours. We really appreciate the support of our local farmers and Hatuma Dicalcic Phosphate."
The extra money has enabled the school to purchase more sports gear.

"It's vital that we support our local school. They are the centre of any rural community. Both Richard and I went to Porangahau School and back then there were six classrooms and over 150 kids. The roll has dwindled since then so we need to ensure our local school stays strong. The Hatuma Growing Minds fund is a good initiative because it means farmers who don't have children at the school can also support their rural school."

Canterbury’s rural primary schools have been given a welcome boost, thanks to the support of local farmers and fertiliser company, Hatuma Dicalcic Phosphate Ltd.

HP New Zealand recently announced its second Rural Schools Competition, which gives rural New Zealand primary schools the chance to win a share of $20,000 worth of HP products and support.

Rural schools around the country have been able to boost resources thanks to the help of farmers and fertiliser company, Hatuma Dicalcic Phosphate Ltd.