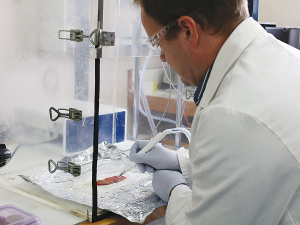 And it could improve product traceability and deter supply chain fraud.

The machine is a rapid evaporative ionisation mass spectrometer (REIMS) now being evaluated at AgResearch’s Lincoln campus for its ability to detect the molecular phenotype or ‘fingerprint’ of samples of meat, milk, plants and wine.

While mass spectroscopy has been around for years, the REIMS device does in seconds what used to take an hour of lab work.

It is designed to assist surgeons in differentiating between healthy and tumorous tissue in near real time. It vaporises samples using an electronic surgical knife and analyses the resulting vapour.

AgResearch senior scientist Dr Alistair Ross says the machine, installed in August, is believed the first of its kind in Australasia. He won approval to bring it to NZ after a demonstration in the UK showed it could differentiate between NZ, English and Welsh lamb.

It can also detect what feed – such as grain, grass or chicory – a carcase was reared on, an increasingly important trait driving consumer spending.

Ross says the REIMS instrument can produce detailed data potentially useful for authentication, including incorporation into blockchains for chemical and digital traceability to prevent food fraud.

“Making sure we have the robust data on provenance and quality has the potential to save NZ millions of dollars through early detection of quality problems and prevention of false labelling,” he explains.

“We’re also finding that we can link the fingerprint to other factors such as consumer liking so in the future it can be possible to ensure NZ agricultural products have guaranteed provenance and quality, and will go to the market which best matches their desired flavour profile.”

This concept points to a future where you could, for example, scan a glass of milk with your mobile device to find out where, when and how it was produced and whether that milk fits your taste profile.

The 300kg device is expensive and must be housed at the laboratory.

But advances in technology could mean simpler instruments using similar concepts become affordable and portable enough for use in meat works, dairy processing plants or on farm.

Ross expected to present his research at the AgResearch stand at the last week’s national Fieldays.