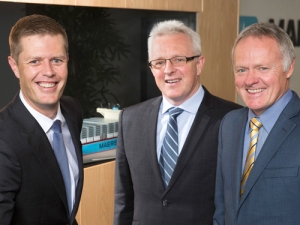 The ship is capable of carrying 9,500 TEU and will be calling at Port of Tauranga at the start of the peak export season.

Maersk Line oceania managing director Gerard Morrison says the collaborative partnership with Kotahi has been a catalyst for Maersk Line's pursuit of bringing larger ships to New Zealand which will deliver benefits to our customers and the country's supply chain.

"To complement the recently announced southbound service, the enhanced Triple Star will increase its frequency from fortnightly to weekly, and from late September, call at Port of Tauranga, arriving from Chile."

Kotahi chief executive David Ross says the new era of big ship visits to New Zealand has been made possible through Kotahi's collaboration with exporters, Maersk Line and Port of Tauranga.

"Two years ago, Kotahi entered separate long-term agreements with Port of Tauranga and Maersk Line to lay the groundwork to bring larger, more sustainable and efficient vessels on to the country's key trade lanes. It's fantastic to see this now being delivered in a shorter timeframe than originally envisaged," says Ross.

"The arrival of larger ships to our waters is a key milestone for New Zealand on its journey to become a more efficient export nation. The new Triple Star enhances services to Asia, and the recently announced South Pacific Express achieves a direct service to South America, enabling New Zealand to better compete with export nations which have big ships on their main trade routes.

"Building on the success of the Triple Star, this service provides a sustainable ocean freight offering for our customers as we work with Maersk Line, and a range of other carriers, to continually find the most efficient route to move products to over 440 destination ports or inland facilities within 139 countries around the world. We're pleased with this smart solution because it has brought efficiencies, by combining cargo and sharing the capacity, with other nations."

Morrison says: "The enhanced Triple Star service shows Maersk Line's commitment to New Zealand and to providing our customer base with unmatched access to global markets. It is predominantly the export volumes from South America to Asia that enables this opportunity for New Zealand exporters to participate in a large, efficient network that introduces the North-Asia direct connection on the Triple Star service."

"This new generation 9,500 TEU vessel is more fuel efficient on a per-container basis and will reduce the carbon footprint of the ocean freight component of New Zealand exports by a minimum of 22% per container unit, compared to the existing New Zealand industry average," says Morrison.

The 9,500 TEU vessel has a length of 348 metres and is designed specifically for the South America and Asia markets with a uniquely high proportion of refrigeration plugs to move chilled products around this region. These are comparable characteristics for New Zealand.

Maersk Line's Southern Star and OC1 services will remain unchanged while its Northern Star service will introduce an additional call in Tauranga to provide customers with optimal export connections to the new Triple Star and South Pacific Express services.

"The final stage dredging work will be completed in August as part of a $350 million capital investment programme to develop the infrastructure to become a port capable of handling larger ships.

"We are pleased to see that our upgraded infrastructure will be utilised so promptly. This gives us the opportunity to continue providing our customers with premium ocean freight solutions from a range of carriers. We're proud to be part of an innovative collaboration keeping New Zealand businesses competitive on the world stage.

"In addition, Port of Tauranga has been working closely with KiwiRail on upgrading train services to meet an increase in demand of cargo travelling between Tauranga and Auckland," says Cairns.

Ross says: "The journey to larger ship visits has spurred a focus to find efficiencies in land-based transport networks to better co-ordinate truck and rail movements. As part of this, Coda Group, our joint venture with Port of Tauranga, recently launched the Coda intermodal freight hub, Savill Drive, Auckland, which brings together import, export and domestic cargo flows into one place, to create efficiencies in the New Zealand supply chain." he said.

Reducing the geographic gap between New Zealand and export markets is possible through greater collaboration amongst primary business and logistics partners.

Dairy farmers stand to benefit financially from the expansion at the Port of Tauranga, says chief executive Mark Cairns.

HAVE LYTTELTON port's problems finally become too much for Fonterra?