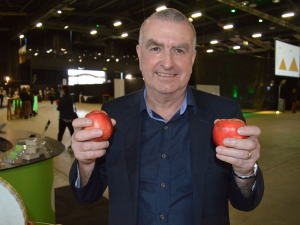 NZ Apples and Pears chief executive Alan Pollard says there could be another 100,000 tonnes of fruit to harvest this year and the industry will need an extra 2,500 workers.

New Zealand Apples and Pears chief executive Alan Pollard says work is underway to facilitate the flights that were delayed this month due to the Level 4 lockdown.

Pollard told Rural News that a lot of planning goes into each flight.

"There are a lot of details required - whether we organise chartered flights or commercial flights, pre-departure testing regime and self-isolation arrangements," he explains. "There is also the visa process and making sure contracts have been secured for the workers.

"We are hopeful of getting the three delayed flights to Auckland early next month."

Earlier this month, the Government announced that the first stage of one-way quarantine-free travel with Samoa, Tonga and Vanuatu will commence in October. It also issued new requirements for these workers: they must receive their first vaccination pre-departure, undertake Day 0 and Day 5 tests and complete a self-isolation period of seven days - pending a negative Day 5 result.

Pollars says growers are comfortable with the new requirement.

He says anyone in NZ, including RSE workers, get fully vaccinated if they wish to be, as part of the plan to keep everyone safe.

He adds that self-isolation and Covid tests for RSE workers were part of the lockdown last year and won't be an issue for the sector.

Pollard says the sector is very happy with the Government decision to resume RSE arrivals.

Normally, there would be 12,500 RSE workers in the country around this time. Due to Covid, this number is around 7,000 - with half of them scheduled to return home.

Pollard says the Government has agreed to a quota of 14,400 RSE workers and the sector hopes to ramp up numbers in the coming months.

"If we have a full season this year, then there will be another 100,000 tonnes of fruit to harvest and we will need an extra 2,500 workers."

The sector also relied on backpackers, but Covid has stemmed their arrival in the country. Pollard estimates there are 5,000 backpackers in the country right now, compared to the usual 50,000.

Agriculture Minister Damien O'Connor says officials in New Zealand are working with partner Pacific countries and the industry on the final measures that need to be in place and exact dates of the October flights.

"Substantial planning has been under way both in New Zealand's horticulture and viticulture sectors and in our partner countries for the arrival of these workers, with some incoming flights deferred in August and September because of New Zealand's Alert Level 4 settings," O'Connor says.

"We will be closely monitoring this first stage of one-way quarantine-free travel.

"Our intention remains to broaden eligibility for quarantine-free entry to New Zealand from these countries and Tokelau when we can be sure it is safe to do so."

Horticulture New Zealand says it welcomes the Government's decision that quarantine-free travel for Recognised Seasonal Employer (RSE) workers from the Pacific will commence next month.

HortNZ chief executive Nadine Tunley says the announcement is a relief for both the New Zealand horticulture industry as well as the Pasifika communities who have been particularly hard hit by the pandemic.

"Confirmation that our RSE workforce can travel is a positive step that will give growers some confidence about labour for the coming season. It will go some way towards winter pruning being completed and the coming season's harvest being picked."

But Tunley notes that even with the increased movement of RSE workers from the Pacific, the horticulture industry will still be short of seasonal workers.

"That's why the whole industry is behind additional programmes to attract more New Zealanders to horticulture," says Tunley.

"Our industyry is grateful to the Government for this agreement. We will continue to work closely with the Government to ensure the safety of our workers, their whanau and the wider community."

A former horticulture sector leader believes New Zealand's Covid response should have been a joint public-private response from day one.