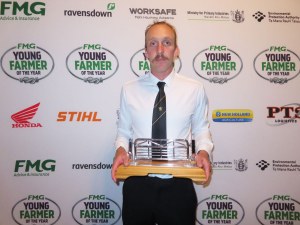 The 30-year-old is a farm worker on a sheep, beef and cropping farm, having previously spent five years as a veterinarian.

The Regional Final was held on Saturday at Russell Park in Waipukurau.

Wallace says he was thankful to the convening committee for putting on the event.

“You put a really good day on, there was something for everyone out there,” he says.

He also thanked a number of people who helped him along the way.

“A special thanks to all the competitors, everyone was really good at something, I certainly wasn’t the best in the practical side there was some great fencing out there. And I’m appreciating the massive irony in winning this trophy with a gate when I couldn’t even get the gate on.”

Ahead of the grand final, Wallace says he will be focusing on improving his practical skills.