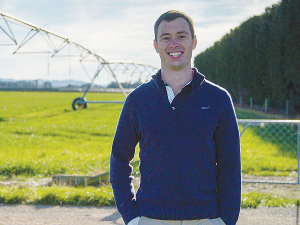 Jake Jarman has been named the 2021 FMG Young Farmer of the Year.

Jake Jarman has been named FMG Young Farmer of the Year 2021.

The ANZ relationship associate represented the Taranaki Manawatu region, beating six other finalists for the prestigious title at Wigram Airforce Museum in Christchurch on Saturday night.

“I’m just also so incredibly thankful to so many people, far too many to name but it’s a huge team of people to pull together this event and a big team behind me to get me here too”.

Jarman says he was determined to give the grand final his best shot after signing up to the contest to just give it a go.

“I was happy that I gave everything a go to the best of my ability and be competitive. I loved the practical day, the challenge of having to multitask under time pressure and be a bit strategic”.

He says he never dreamed he would win the title but was immensely proud of the achievement and hoped it would inspire others.

The victory was a cumination of days of practical and technical challenges set out to test the seven finalists’ skills, knowledge and stamina.

Contestants participated in a technical day, a practical day, speeches, exams and the FMG Young Farmer of the Year buzzer quiz.

“My fellow competitors certainly didn’t make it easy and honestly, I feel like it was anyone's game for the whole three days. It’s been a privilege getting to know them and to now call them friends”.

“It is an absolute honour to have Jake named as the 2021 FMG Young Farmer of the Year,” she says.

“Jake is a fantastic leader for the ag sector, a role model and has already inspired other young people to believe in themselves and showcase what they’re made of. It’s incredibly exciting to see what lies ahead for Jake and as the 2021 FMG Young Farmer of the Year, we are grateful to be able to part of that.”

FMG Young Farmer of the Year kicks off new season

The FMG Young Farmer of the Year 2022 contest will be kicking off on 9 October 2021 for the new season’s qualifying rounds.

Working in the agri-nutrient sector, Calvin Ball says he has seen a significant change in farmers' attitudes to health and safety in recent years.

Getting home safely is the main thing